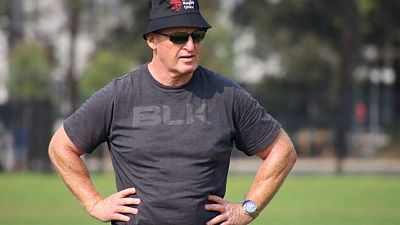 Kenya Sevens Technical Director Paul Feeney has shared his thoughts on the team's outing at the third and fourth rounds of the 2019/20 HSBC Sevens World Series in Hamilton, New Zealand and Sydney, Australia.

Speaking at Nairobi's Jomo Kenyatta International Airport upon the team's arrival from Australia on Tuesday afternoon, Feeney said the team was slowly working on fixing the errors they made in the two legs as they build-up to the Olympics set for July 2020, “I am proud of what the boys are doing and much as the results in Sydney were disappointing, we move on and work on winning games in the next tournament.”

Captain Andrew Amonde echoed Feeney’s comments saying they were happy with their performance in Hamilton but disappointed in Sydney, “We were humbled by the top teams in Sydney but it’s up to us to work on how we bounce back to winning ways after things fail to go our way.”

The team collected a total of 11 points over the legs, taking their season tally to 26 points, a feat that sees them sit 11th overall on the series log.

They will resume their training sessions next week as they prepare for the Northern American legs of the series in Los Angeles, USA (29th Feb/1st March)  and Vancouver, Canada (7th/8th March)