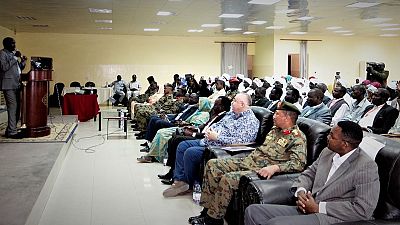 The two Conferences, held under the theme: “Peace First” took place in El Fasher, North Darfur on 30 January and 1 February to discuss ways of unifying views on issues related to the current situation in Darfur and to prioritize issues to be addressed during the peace talks to bring peace and stability to Darfur.

Speaking at the opening ceremony of the IDPs Conference, the Wali (Governor) of North Darfur, who also represented the Government of Sudan and other Darfur Walis, Major General Malik El Tayeb Khojali, commended the Joint Field Committee and UNAMID for facilitating the two Conferences, stating that this gesture from all concerned parties, will have a positive impact on the ongoing peace talks in Juba.

Ms. Najat Suleiman, a representative of the Joint Field Committee, commended the Peace and Development Study Centers in the five Darfur states for their commitment to the consolidation of social peace, praising the great role that the native administration continues to play in society, in terms of conflict resolution and promoting harmony and peaceful coexistence among the local communities.

In their remarks, the Directors of the Peace and Development Study Centers in Nyala and El Daein Universities, Drs. Jaafar Ali Fadul and Adum Mohamed, underlined the importance of ending war and conflicts in Darfur for the sake of sustainable peace, stability, development and democracy in the region. They called on the participants to come up with concrete outcomes that will help the negotiating parties to reach a comprehensive peace agreement that will lead to lasting peace and stability in Sudan.

The convening of the consultative conferences for IDPs and Darfur civil society is in line with the Framework of the Protocol signed by the TGoS and SRF-Darfur Track on 23 December 2019 on aspects related to the participation of IDPs, refugees, civil society and native administration in the peace talks in Juba.

More than two hundred IDPs participated in the IDPs consultation conference and will in turn nominate 50 representatives (25 men and 25 women) to represent them in the peace talks in Juba. An additional 200 participants from Darfur took part in the native administration and civil society stakeholder’s consultation conference, including farmers and herders. They are also set to nominate 50 representatives (25 Native Administration and 25 society stakeholders) to participate in peace talks, currently underway in Juba, South Sudan.