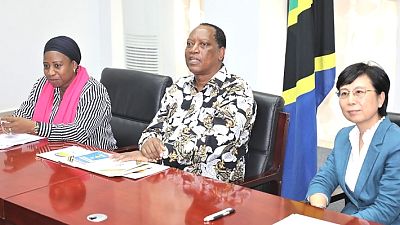 Chinese Ambassador to Tanzania, Ms. Wang Ke, has assured parents and relatives of the safety of over 4,000 Tanzanian students, 400 of whom are in Wuhan, in Hubei Province which is said to be the source of the corona virus.

“All Tanzanian students are safe and none have been infected,” she said.

She gave the confirmation in a joint statement by the government of Tanzania through the Foreign Affairs and East African Cooperation Minister, Prof. Palamagamba Kabudi and China through its embassy together with the Minister for Health, Community Development, Gender, Elderly and Children, Ms. Ummy Mwalimu in Dar es Salaam yesterday.

Giving the statement, Prof. Kabudi said that the Embassy of China requested to meet with the government with the aim of having a joint statement concerning the situation in China, steps taken by its government to prevent the disease from spreading to other parts of the world, together with the situation of Tanzanians living in China.

He added that the Chinese Government, in collaboration with the World Health Organisation (WHO), are taking all measures to ensure that the virus does not spread to other areas, especially after it declared the disease a disaster; Including China's efforts to build a special hospital to treat all those infected.

Meanwhile, there is no-one in the country, be it a citizen or foreigner, who has been exposed to the virus, and the government continues to take appropriate and emergency measures, including screening all arrivals in the country through airports and other forms of transport, assured Ms. Mwalimu.

“The government, in collaboration with other stakeholders, has strengthened the ability to test any suspected person of the virus in the country , instead of sending the samples to other places, including abroad,” she said.

She emphasized that, until now, there is no one suspected or is a patient confirmed to have corona virus.

The ministry has already identified four areas that are most vulnerable of the infection to be Dar es Salaam, Mwanza and Kilimanjaro.

More discussions are being held for Zanzibar to also identify areas susceptible of infection. Additionally, Tanzania has stated that there is no prohibition on any Tanzanian citizen who is abroad who is prevented to return to the country at one's own convenience, including those coming from China.

Moreover, the Permanent Secretary in the Ministry of Foreign Affairs and East African Cooperation, Dr. Faraji Mnyepe, has assured those who want to return to Tanzania from China, that the Tanzanian Embassy in China will collaborate with them for their safe return to the country, as there was no prohibition on returning home.