1 point for Shujaa in Australia 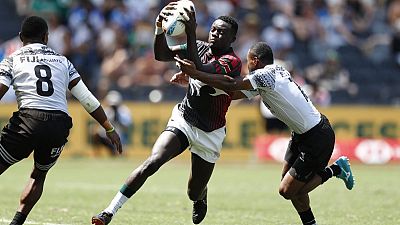 The Kenya men’s sevens national team, Shujaa, collected one point at the fourth round of the 2019/2020 HSBC Sevens World Series this past weekend in Sydney, Australia after placing 16th overall.

Playing out of Pool A, Shujaa finished their preliminary round matches winless, starting with a 14-28 defeat to Fiji before losing 21-26 to Wales. They wound up their pool fixtures with a 5-19 defeat to New Zealand before losing the 15th place playoff 19-12 to Samoa.

The one point in Australia saw Shujaa take their points tally for the season to 26 points as they now sit 11th overall on the series log heading into the North American legs in Los Angeles, USA and Vancouver, Canada in slightly under a month from now