Born in 1956, Mofokeng grew up in and around Soweto, spending most of his childhood in Orlando East. Mofokeng’s initial experiences with photography were as a teen when one of his sisters gave him his first camera. He grew up in poverty and spent his school years at the Morris Isaacson High School in Soweto; one of the hotbeds of the violently suppressed Soweto uprising in 1976. While still a teenager, he began his career as a street photographer and went on to work as an assistant in a darkroom, and then became a news photographer. In 1985, Santu Mofokeng joined and formed part of the Afrapix Collective that engaged in exposé and documentary photography of anti-apartheid resistance and social conditions during the 1980s in South Africa. However, Mofokeng was an increasingly important internal critic of mainstream photojournalism, and of the ways black South Africans were represented in the bigger international picture economy during the political struggle.

Two years later, in 1987 he was appointed at the New Nation newspaper.  From 1988 to 1998 he worked as a documentary photographer and researcher for the African Studies Institute’s Oral History Project, at the University of the Witwatersrand, and focused on producing images representing the lives of people in their homes and other aspects of daily life.

Mofokeng resided and worked in Johannesburg. He taught photography at the Market Photo Workshop and at the University of the Witwatersrand. Between 1989 and 2010, Mofokeng held over twenty solo exhibitions and participated in numerous select group and collaborative exhibitions locally and around the world. Mofokeng curated photography exhibitions in South Africa, France and Mali. Between 1990 and 2009 he received numerous awards and fellowships for photography including the Ernest Cole Scholarship to study at the International Centre for Photography in New York.

“Santu Mofokeng gave an “insight into ordinary black South Africans”, his long-time friend and colleague, photographer Paul Weinberg, said on Monday. “It is a very sad day. He was a very good friend and colleague and we had many journeys together in a fractured society, so our friendship was important”. Weinberg and Mofokeng were the founding members of the  Afrapix that produced documentary photography.

Distributed by APO Group on behalf of South African Embassy in Paris, France. 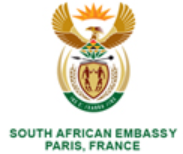