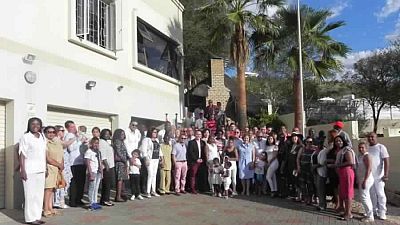 The 167th Anniversary of the Birth of our Apostle and National Hero, José Martí, was commemorated in Namibia with the presence of the Cuban ambassador, Sidenio Acosta, the Venezuelan ambassador, Omar Barretoran, officials of both diplomatic headquarters, Cuban collaborators and members of the Namibia-Cuba Friendship Association and the “Patria” Association of Cuban Residents.

The emotional act began with the notes of the National Anthems of Cuba and Namibia. Subsequently, collaborators Yanelys Ruiz and Bárbara Fernández interpreted fragments of the poem Abdala, written by José Martí. Rosa González and Yanet Cejas, also Cuban cooperators, deposited a floral offering on the Apostle's bust, located at the headquarters of the Cuban diplomatic mission, with the inscription: “Tribute to José Martí of all Cubans in Namibia.” Also others present honored our National Hero by placing flowers on his statue. Later, everyone kept a minute of silence in memory of the greatest of all Cubans.

Also, Dr. Arnaldo Meneses, Head of the Cuban Medical Brigade in Namibia, who was in charge of the keynote speech of the event, strongly condemned the outrage to the Apostle, perpetrated by mercenaries paid from the United States.

In addition, he stressed the importance and validity of Martian thought for Cuban patriots. The Cuban doctor highlighted the presence of the Apostle's ideology in all the work of the Revolution, which, under the guidance of Commander in Chief Fidel Castro, put into practice the humanist, Latin American, anti-imperialist and independentist doctrine of Marti.

In line with the National Hero's thinking, the attendees condemned the imperialist aggression against the Bolivarian Republic of Venezuela and expressed their support for the government of President Nicolás Maduro. Similarly, they transferred their solidarity with other Latin American peoples and with leaders Luis Ignacio Lula Da Silva and Evo Morales.

On the other hand, the economic, commercial and financial blockade of the United States against Cuba was also repudiated by those present, who demanded the end of that criminal policy against the Island.

The ceremony had television coverage by the national network NBC. The ambassadors of Cuba and Venezuela offered their impressions about the commemoration ceremony.

Distributed by APO Group on behalf of Ministry of Foreign Affairs of Cuba.
Media files

Download logo
Cubans and Namibians commemorate the Birth of the Apostle