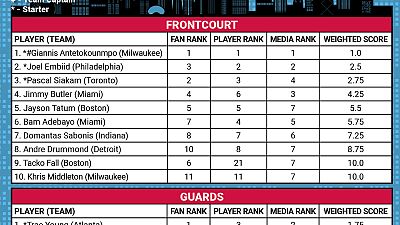 The Los Angeles Lakers’ LeBron James and the Milwaukee Bucks’ Giannis Antetokounmpo lead the list of 10 players – two guards and three frontcourt players from each conference – selected by fans, current NBA (https://www.NBA.com) players and a media panel to start in the 2020 NBA All-Star Game.

The 2020 NBA All-Star Game, featuring Team LeBron vs. Team Giannis, will take place on Sunday, Feb. 16 at the United Center in Chicago. TNT and ESPN Radio will air the game live in the United States at 8 p.m. ET. NBA All-Star 2020 will reach fans in more than 200 countries and territories in more than 40 languages.

James has been named an NBA All-Star for the 16th time, moving into sole possession of third place for the most selections in league history behind Kareem Abdul-Jabbar (19) and Kobe Bryant (18). When he takes the court in Chicago, James will set the NBA record for All-Star starts with 16, one more than Bryant (15).

With Dončić, 20, and Young, 21, selected as starters, this marks the second time that an NBA All-Star Game will include multiple 21-and-under starters – a scenario that played out in the 1998 All-Star Game with Bryant (19) and Kevin Garnett (21). The last time multiple second-year NBA players started the same All-Star Game, as Dončić and Young are set to do in Chicago, was the 1996 All-Star Game (Grant Hill and Jason Kidd).

In the 2020 NBA All-Star Draft, James and Antetokounmpo will draft the eight remaining players from the starter pool in the First Round and then all 14 players from the reserve pool in the Second Round. The captains will make their selections without regard to a player’s conference affiliation or position.

After all votes were tallied, players were ranked in each conference by position (guard and frontcourt) within each of the three voting groups – fan votes, player votes and media votes. Each player’s score was calculated by averaging his weighted rank from the fan votes, the player votes and the media votes. The two guards and three frontcourt players with the best score in each conference were named NBA All-Star Game starters.

About NBA All-Star 2020:
NBA (https://www.NBA.com) All-Star 2020 in Chicago will bring together the most talented and passionate players in the league’s history for a global celebration of the game. The 69th NBA All-Star Game, which will take place on Sunday, Feb. 16 at the United Center, will reach fans in more than 200 countries and territories in more than 40 languages. TNT will televise the All-Star Game for the 18th consecutive year, marking Turner Sports’ 35th year of NBA All-Star coverage. United Center will also host Rising Stars on Friday, Feb. 14 and State Farm All-Star Saturday Night on Saturday, Feb. 15. The NBA All-Star Celebrity Game presented by Ruffles on Feb. 14 and the NBA All-Star Practice & Media Day presented by AT&T on Feb. 15 will take place at Wintrust Arena.