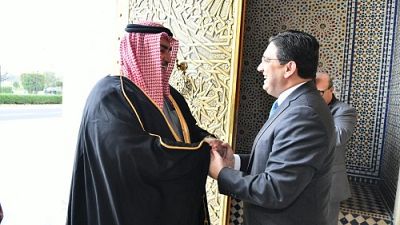 Mr. Nasser Bourita welcomed the Minister of Foreign Affairs, stressing the strength of the close and exceptional brotherly relations between the two countries and their continues joint coordination towards arab, regional and international issues, expressing his appreciation for the solid stances and support of the Kingdom of Bahrain to the Kingdom of Morocco, adding the important role of the Kingdom of Bahrain in establishing security and stability in the whole region.

For his part, the Minister of Foreign Affairs expressed Bahrain’s pride in the deep historical brotherly relations with the Kingdom of Morocco, which are based on a long history and characterized by continuous development, progress and a constant desire to move in various fields of bilateral cooperation to broader horizons, in light of the great attention these relations receive from His Majesty King Hamad bin Isa Al Khalifa, the King of the Country, and his brother, His Majesty King Mohammed VI, King of the Kingdom of Morocco.

During the meeting, consultations, discussions and coordination took place on the most important developments in the region.

In statements to the media after the meeting, Shaikh Khalid bin Ahmed bin Mohammed Al Khalifa stressed the Kingdom's solid position and support for the brotherly Kingdom of Morocco and its initiative for autonomy in the Moroccan Sahara within the framework of Moroccan sovereignty, the unity of Moroccan soil, and according to international legitimacy, noting that the Kingdom of Morocco is a historical kingdom that has always ruled the Sahara.

The Minister of Foreign Affairs praised the historical role played by the Kingdom of Morocco in advocating and defending Arab and Islamic issues in international forums, and its constructive and tangible contributions in support of efforts aimed at establishing peace and stability, in addition to promoting development and progress in the African continent.

For his part, Mr. Nasser Bourita said that this meeting falls within the framework of continues communication and consultation between the two brotherly countries on bilateral and regional issues, stressing the compatibility of the two countries' views on these issues, once again the solidarity of the Kingdom of Morocco with the Kingdom of Bahrain on all issues.

Distributed by APO Group on behalf of Ministry of Foreign Affairs of Kingdom of Bahrain.
Media files