On 18 January, non-state armed groups stormed a humanitarian facility in Ngala town, some 124 kilometers from Maiduguri, the capital of Borno state. Although all United Nations humanitarians in the facility – including three IOM staff – were reported safe, an entire section of the facility was burned down as well as one of the few vehicles used by humanitarians to deliver aid.

“The intended effect of this is to intimidate the humanitarian actors working in north-east Nigeria. We have seen this as humanitarian workers are increasingly targeted,” said IOM Nigeria Chief of Mission Franz Celestin.

The targeted facility is one of nine humanitarian hubs in Borno managed by IOM. Humanitarian hubs provide operating environments for aid workers in deep field locations, including accommodation, office and connectivity services. These spaces are critical for a sustained and effective humanitarian response in Nigeria.

“These (humanitarian) hubs are the ultimate enablers to allow the humanitarian workers to improve the quality of the response by allowing them enough time on the ground to do what they're supposed to do. Prior to the hubs, humanitarian workers could only go on day trips, so they'd go one day at a time to deliver services,” Celestin said.

The attack comes just 11 days after members of a non-state armed group (NSAG) infiltrated Monguno town. Two children, an adult male and one adult female were killed in the attack on a camp for internally displaced people. In addition, several injured people are currently receiving medical attention at a nearby clinic run by ALIMA, an international non-governmental organization.

That deadly attack left 2,728 people homeless. According to an IOM Displacement Tracking Matrix (DTM) report, more than 300 shelters and properties belonging to the affected individuals were destroyed.

The ongoing conflict in north-east Nigeria continues to claim the lives of innocent people, and increasingly, of humanitarian workers. In 2019, twelve aid workers lost their lives, twice the number of deaths in the previous year.

DTM provides detailed and up-to-date information on characteristics and needs of crisis-affected populations registration and profiling of displaced populations in camp and camp-like settings, flow monitoring exercises and reports, as well as the provision of detailed infrastructural information on areas of return through village assessment surveys. DTM reports and tools can be found here 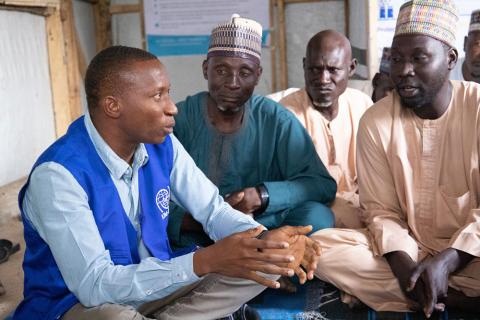