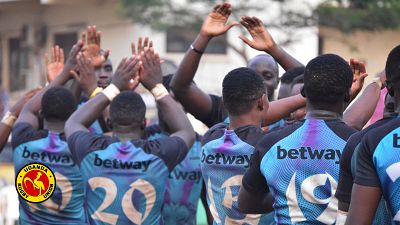 Betway Kobs climbed to 2nd place on the 10-team log of the Nile Special Stout Premier League after defeating Stanbic Black Pirates 23-11 on Saturday at Legends grounds. Pirates mounted early pressure on the hosting team kobs scoring the first try of the game by their prop Pajob Edgar.A conversion by Conrad Wanyama was unsuccessful. However Kobs grew in confidence as the game went on and had a first half try to level the score before 2 further tries in second half took the game away from the Pirates who only managed 2 further penalties in the match

Hima Cement Heathens who smashed 9 Barrels Warriors 43-9 to maintain top place are still leading with 23pts followed by Betway Kobs (19pts). Formerly 2nd placed Warriors are in 3rd place with 16pts after they lost to Heathens. Stanbic Black Pirates are 4th with 14 pts,Plascon Mongers 5th with 12 pts. Toyota Buffaloes are 6th with 12pts followed by Mulago Rams in the seventh place with 7 pts with Jinja Hippos with 8pts.Shell Rimula Rhinos drew closer to the relegation zone with 5pts at 9th place after losing to Rams 25-11. Makerere Impis stayed last on the table after failing to show up for their game against Mongers in Entebbe.

Current leaders Hima Cement Heathens head into match day six with a clash at home as they host Jinja Hippos who come into this fixture placed eighth.(2.30pm) This is one of the 2 fixtures taking place at Kyadondo Rugby Grounds on Saturday.The other pits sixth placed Toyota Buffaloes against third placed 9 Barrels Warriors at 4.30pm.

Pirates vs Rams at 4.30pm at Kings Park

Impis vs Kobs at 4.30pm at Makerere

RHinos vs Mongers at 4.30pm at Legends

Heathens vs Hippos at 2.30pm at Kyadondo

Buffaloes vs Warriors at 4.30pm at Kyadondo


Distributed by APO Group on behalf of Uganda Rugby Union.