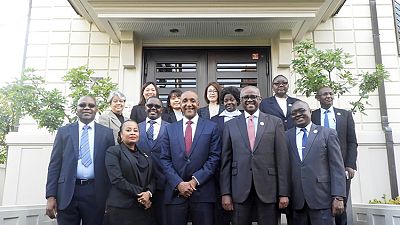 Amb. Macharia Kamau, CBS, Principal Secretary of Foreign Affairs made an official visit to Tokyo, Japan from 13th – 16th January, 2020 at the invitation of the Government of Japan to attend the Strategic Exchanges on Practical Level (STEP) programme.

Upon arrival, the Principal Secretary visited the Chancery where he was received by Ambassador S. K. Maina, MBS, and had a consultative meeting with the staff of the Embassy.

Discussions centered on the excellent bilateral relations between Kenya and Japan, and charted the way forward to strengthen the cooperation. The Principal Secretary engaged his hosts on issues such as trade and investment, peace and security, infrastructure development, and the Blue Economy.

Distributed by APO Group on behalf of Embassy of the Republic of Kenya in Japan.
Media files