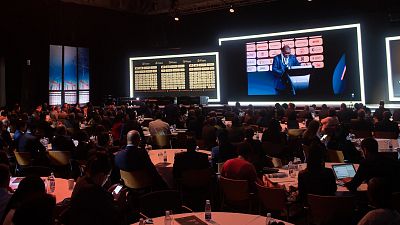 For the first time, AOP will host the Africa Renewables Forum, the Africa LNG Forum and the Energy Finance Forum, in line with the vision of South Africa’s Department of Mineral Resources and Energy and government and private sector partners from all four corners of the continent. The theme of this year’s conference, marking the entering into force of the African Continental Free Trade Area, is #InvestWithoutBoundaries. AOP 2020 is the only conference on the continent that fully unites power with petroleum, focusing on the driving factors behind Africa’s energy transition.

“AOP 2020 is the meeting place for Africa’s government officials, global investors and executives, to get deals done and continue moving the continent forward. This year’s conference will encompass the entire energy value chain, including the economic significance of expanding oil and gas exploration, the role of gas-to-power in electrifying Africa; the need to fully utilize and integrate renewables and the importance of using energy to spur growth and economic development throughout the continent,” says Africa Oil & Power Acting CEO, James Chester.

With the African Continental Free Trade Agreement now in its operational phase – establishing a single African market that encompasses the free trade of goods and movement between 54 countries – cross-border trade on the continent will lure investment, encourage job creation and place an emphasis on the need for new technology and cross-border collaboration.

Industry leaders will discuss gas exploration and production throughout the continent with countries including Mozambique, Ghana, South Africa and Equatorial Guinea positioning themselves as major gas players in Africa.

The Mozambique-based Rovuma LNG project envisages a 15 million ton per annum two-train facility, taking gas from its offshore area 4 block. Led by Eni and ExxonMobil, the Rovuma LNG project will develop reliable, affordable energy in the form of liquefied natural gas and transform the future of Mozambique. The final investment decision on the project will be made this year, with operations expected to begin in 20205.

Additionally, South Africa’s first LNG hub is set to be developed at the Coega Special Economic Zone in Port Elizabeth, which will stimulate the country’s gas economy and enhance energy security.

Equatorial Guinea, meanwhile, is pioneering gas development and trade in West and Central Africa through the construction of an LNG storage and regasification plant at the Port of Akonikien under the LNG2Africa initiative.

The use of renewable energy in Africa is rapidly increasing. South Africa’s Renewable Energy Independent Power Producer Procurement program has played a fundamental role in the country’s economic growth and providing an alternative form of energy. The hugely successful program has, to date, attracted R209.4 billion in investment and created over 38,000 jobs.

“The launch of the Africa Renewables Forum, the Africa LNG Forum and the Energy Finance Forum at AOP 2020 bring new and diverse energy sector audiences together on a single stage and in a single venue,” said Chester. “AOP brings new technology to Africa and stimulates new collaboration and trade on the continent. This is the platform where the next generation of projects and deals are initiated and advanced.”