Fifty years after the Biafra War, a turning point for humanitarian assistance 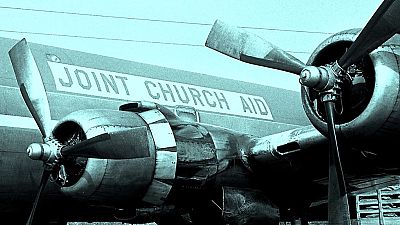 The Biafra War (1967-1970) in Nigeria led to a humanitarian crisis and the world’s largest civilian airlift. As a result, groundbreaking reforms were launched in humanitarian assistance.

The Biafra War in the public eye

In 1968, the world saw pictures of starving children in Biafra. These images shone a spotlight on a conflict, the Biafra War in Nigeria, which had been raging virtually unnoticed by the West. Southeast Nigeria had declared its independence in May 1967, leading to a protracted civil war and a humanitarian crisis. The war only ended two‑and‑a‑half years later, on 15 January 1970. Up to two million people died, many of them from starvation.

The images of the “Biafra children” created a wave of solidarity in many countries and a flood of donations. Furthermore, the Biafra War became a turning point for the development of humanitarian assistance. The churches played a crucial role in Biafra. Church organisations of various denominations and from different countries joined forces to form an aid alliance and provided people in the Biafran enclave with food and medicine via an airlift. Although it is less famous than the Berlin Airlift, this was the largest civilian airlift in world history, with 80,000 tonnes of food and medicine transported by over 7000 flights. According to official figures, the airlift saved a million lives.

An event co-organised with Diakonie Katastrophenhilfe and Caritas International is taking place at the Federal Foreign Office on 14 January 2020 to mark the fiftieth anniversary of the end of the Biafra War. Experts from humanitarian organisations, academia and civil society will discuss developments in humanitarian assistance and the importance of the humanitarian principles. Civil‑society and church organisations are essential partners in alleviating human suffering around the world. The Federal Foreign Office supports a large number of humanitarian aid projects run by organisations such as Diakonie Katastrophenhilfe and Caritas International.

Establishment of the humanitarian principles

“Humanitarian assistance has developed tremendously in the past 50 years. As one of the largest humanitarian donors, Germany works with its partners to ensure that the humanitarian principles of humanity, impartiality, neutrality and independence are upheld and promoted, as respect for these principles helps humanitarian organisations and aid workers to negotiate access and people in need to receive aid even in complex crises and conflicts.”