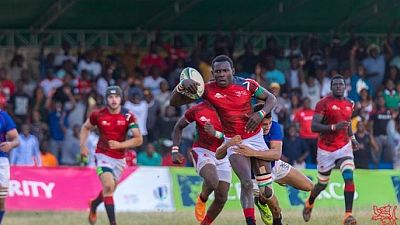 Geoffrey Okwach has been nominated in the Most Promising Athlete (Male) category of the 2019 Sports Personality Of The Year  (SOYA) Awards.

Okwach's year kicked it off with a call up to the National U20 Team in January before earning Simbas and Shujaa call ups later in the year.

The KCB youngster was part of the Kenya U20 (Chipu) squad that lifted the Barthes Cup in April 2019 as they beat defending champions Namibia 21-18 at the KCB Sports Club.

His exemplary performance during these two versions of the game saw him get his call up to the senior National Teams: Simbas and Shujaa.

Okwach earned his first senior fifteens cap for the Simbas in the 16-5 Elgon Cup first leg defeat to Uganda in Kisumu in June 2019.

He was part of the Kenya Morans squad lifted the Robin Cahill Trophy at the Safari Sevens with a 19-14 win over South Africa at a packed RFUEA Grounds. He also bagged the top try scorer award at this tournament ,sharing it with South Africa’s Captain Siviwe Soyizwapi.