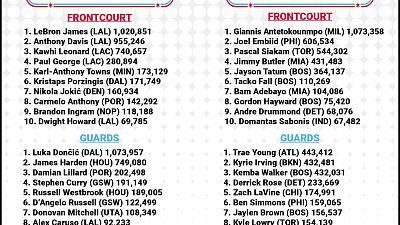 The Dallas Mavericks’ Luka Dončić and the Milwaukee Bucks’ Giannis Antetokounmpo lead the NBA (http://www.NBA.com) and their respective conferences in the first fan returns of NBA All-Star Voting presented by Google. Dončić leads Antetokounmpo by 599 votes for the top spot among all players.

Fans account for 50 percent of the vote to determine the 10 starters for the 2020 NBA All-Star Game, which will take place at the United Center in Chicago on Sunday, Feb. 16 at 8 p.m. ET on TNT. All current NBA players and a media panel each account for 25 percent of the vote, with every voter completing one full ballot featuring two guards and three frontcourt players from each conference. Voting for fans, players and media will conclude on Martin Luther King Jr. Day, Monday, Jan. 20 at 11:59 p.m. ET.

Dončić, the 2018-19 Kia NBA Rookie of the Year, leads all NBA players with 1,073,957 fan votes to earn the top spot among Western Conference guards. The Houston Rockets’ James Harden is second among West guards with 749,080 votes.

LeBron James, a 15-time NBA All-Star, has 1,020,851 votes to earn the top spot in the Western Conference frontcourt. James’ Lakers teammate Anthony Davis ranks second in the West frontcourt with 955,246 votes, followed by the LA Clippers’ Kawhi Leonard with 740,657 votes.

Antetokounmpo, an NBA All-Star starter in each of the previous three seasons, is the top vote-getter among all Eastern Conference players, receiving 1,073,358 votes in the frontcourt group. Joining Antetokounmpo at the top of the East frontcourt are second-place Joel Embiid of the Philadelphia 76ers (606,534) and third-place Pascal Siakam of the Toronto Raptors (544,302).

In the East guard group, the Atlanta Hawks’ Trae Young leads with 443,412 votes. The Brooklyn Nets’ Kyrie Irving is the second-leading guard with 432,481 votes, putting him 450 votes ahead of third-place Kemba Walker of the Boston Celtics (432,031).

The NBA All-Star 2020 team rosters will be drafted by the two captains. They will choose from the pool of players voted as starters and reserves in each conference, making their selections regardless of conference affiliation. The captains will be the All-Star starter from each conference who receives the most fan votes in his conference.


After all votes are tallied, players will be ranked in each conference by position (guard and frontcourt) within each of the three voting groups – fan votes, player votes and media votes. Each player’s score will be calculated by averaging his weighted rank from the fan votes, the player votes and the media votes. The two guards and three frontcourt players with the best score in each conference will be named NBA All-Star Game starters. Fan voting will serve as the tiebreaker for players in a position group with the same score.

NBA All-Star Voting presented by Google began on Dec. 25 and runs until Monday, Jan. 20. The two remaining fan voting updates will be shared on Thursday, Jan. 9 and Thursday, Jan. 16.

About NBA All-Star 2020:
NBA All-Star 2020 in Chicago will bring together the most talented and passionate players in the league’s history for a global celebration of the game. The 69th NBA All-Star Game, which will take place on Sunday, Feb. 16 at the United Center, will reach fans in more than 200 countries and territories in more than 40 languages. TNT will televise the All-Star Game for the 18th consecutive year, marking Turner Sports’ 35th year of NBA All-Star coverage. United Center will also host Rising Stars on Friday, Feb. 14 and State Farm All-Star Saturday Night on Saturday, Feb. 15. The NBA All-Star Celebrity Game presented by Ruffles on Feb. 14 and the NBA All-Star Practice & Media Day presented by AT&T on Feb. 15 will take place at Wintrust Arena.