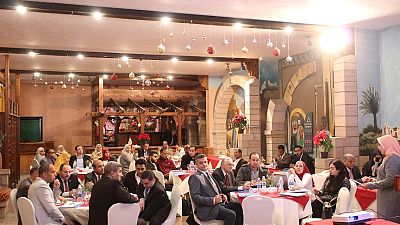 Developing a more effective risk-based imported food control system is essential to ensure that Egyptians have ready and sustained access to safe and nutritious food, and to protect consumer’s health.

It is also essential to facilitate trade of food products into Egypt, whilst spreading the Codex Alimentarius culture in Egypt.

To achieve such development, the Food and Agriculture Organization of the United Nations (FAO), in cooperation with the National Food Safety Authority (NFSA), Egyptian Organization For Standardization & Quality (EOS),Codex Alimentarius, and some of the related authorities are implementing the project on “Enhancement of Egypt’s Food Trade Capacities through an Improved Control System”, to strengthen Egypt’s food control system, to ensure food safety, and to support the Codex Alimentarius’ capacities in Egypt, while highlighting its structure.

Accordingly, a series of training workshops took place, starting with a workshop and a program to develop a risk-based imported food control system for Egypt, with the participation of 30 experts from the National Food Safety Authority.

This workshop focused on developing competency and resources to:

The second and third workshops, that were held in cooperation with EOS in Alexandria and Aswan, placed a greater emphasis on the structure and the program of the Codex Alimentarius in Egypt in order to facilitate trade and ensure food safety.

Participants included representatives from the Ministry of Agriculture and Land Reclamation, the Ministry of Supply and Internal Trade, the National Authority for Food Safety, the Veterinary Services Authority, the Chamber of Food Industries and Companies, and some of the professors from the faculties of Agriculture and veterinary Medicine from different Egyptian universities, and representatives of government agencies related to Codex work, as well as experts from FAO.

“Food safety and food control are thus long-standing areas of work for FAO that has developed guidelines and manuals to strengthen national food control systems as well as approaches to support continuous improvement at the national level” said Nasredin HagElamin, FAO Representative in Egypt.

“Food safety in Egypt requires integration between the public and private sectors, as well as cooperation between all partners to benefit from available scientific and practical academic experiences represented in universities, research centers and others along with the industrial and production sector. The opportunity has come to join all efforts to support decision-makers to include the Codex Alimentarius within the national policies for food safety in Egypt, as this will positively affect the health and safety of consumers, and facilitate the movement of food exchange between Egypt and the world, “he continued.

“Egypt adopted food legislations since a long time and there are relevant bodies that have been working in this domain for a very long period of time. Unfortunately, Egypt has a low ranking in terms of entry and exit of food shipments at the global level. Therefore, there was a desire to improve Egypt's ranking to reach a level close to the professional countries in terms of dealing with exports and imports. Accordingly, we have cooperated with FAO, which relies on international standards in this field,” said Mr. Hussein Mansour, NFSA president.

“More than 30 inspectors from the Food Safety Authority participated in this series of workshops, in order to become among the first ones trained on dealing with these procedures. It is intended to start organizing a number of other workshops to train the ones responsible on controlling the food imports and exports while relying on technology in the exchange of information and documents to achieve our goal, namely securing exports and imports from shipments, which will guarantee consumer protection, whether in Egypt or abroad within only two days, “he added.

“The aim of the workshops is to know the views of all national authorities regarding Codex activities in Egypt, in addition to preparing international and regional standards projects, within the framework of the project on “Enhancement of Egypt’s Food Trade Capacities through Harmonized and Improved National Imports Control System”,which is implemented in cooperation with the FAO, “ said Ashraf Afifi, Chairman of the Egyptian Organization for Standardization and Quality and Chairman of the Egyptian Codex Committee.