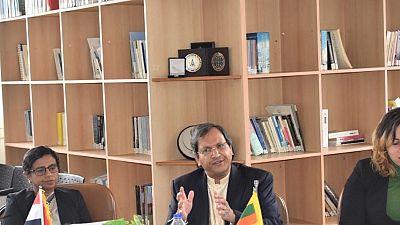 Foreign Secretary Ravinatha Aryasinha has said the operationalization of the recently developed ‘RevitalizedAfrica Policy’, seeks to enhance Sri Lanka’s cooperation in the political, economic and cultural spheres across Africa. Among the envisaged measures for closer engagement are the expansion of Sri Lanka’s diplomatic presence in Africa, stronger and mutually productive economic collaboration, revitalization of the historic people to people linksand close cooperation in multilateral fora and regional organizations. The policy document aims to optimize the strategic linkages through proximity to the Indian Ocean, centrality of Sri Lanka’s location, and cooperation through the 54 member-African Union (AU), where Sri Lanka received Observer Status in 2014.

Mr.Aryasinha made these observations last Wednesday (11 December) when he addressed a representative group of scholars at the Egyptian Council for Foreign Affairs in Cairo, presided over by Ambassador Mounir Zahran, Chairman of the Egyptian Council for Foreign Affairs on the theme ‘Sri Lanka – Egypt Relations and Strengthening Sri Lanka’s Relations with the African Continent’. This was also the focus of a television discussion the Secretary participated in with ‘Nile TV’, a cable network that broadcasts across Africa. The Foreign Secretary was in Cairo for the Inaugural Session of the Bilateral Political Consultations between Sri Lanka and Egypt.

‘Revitalized Africa Policy’ is a policy document prepared by the Foreign Relations Ministry in consultation with Sri Lankan line agencies, Colombo based African diplomatic representations and Honorary Consuls, Sri Lankan Missions and Honorary Consuls in Africa and the Lakshman Kadirgamar Institute. These initiatives will provide a framework for engagement with the African region and seek to create multiple symbiotic linkages that will augment a stronger Sri Lanka-Africa nexus.

In his address, Foreign Secretary Aryasinha also underlined the significant contribution made by Sri Lanka to the liberation struggles of Africa and the Arab world – from support in 1956 during the Suez Crisis, through the 1960s – 1990s in overcoming apartheid and racism across the continent, to the continuing support to the Palestinian struggle. He recalled the words of Prime Minister Sirimavo Bandaranaike at the 31st session of the UNGA in September 1976 as the Chairperson of the NAM, where she reiterated her support and that of the Non Aligned Movement to the African people’s struggle in the following words: “What the Colombo documents seek to convey, is that the river of history cannot flow backwards and that the longer the racist regimes take to realise this, the more serious would be the consequences for peace on that continent and elsewhere”.

He expressed the hope that by creating greater awareness of Africa and its emerging opportunities within Sri Lanka, and of Sri Lanka within African countries, Sri Lanka can work with African friends to build on our longstanding links towards more substantive and productive outcomes. Through these endavours, Sri Lanka would be able to expand its foot print in Africa, and tangibly increase economic engagement with the African region which is currently at a nascent stage, significantly through bilateral trade, investment and people-to-people ties in a mutually beneficial manner. The Foreign Secretary noted that once implemented, the African Continental Free Trade Agreement will add further stimulus to the trade and investment relationship.