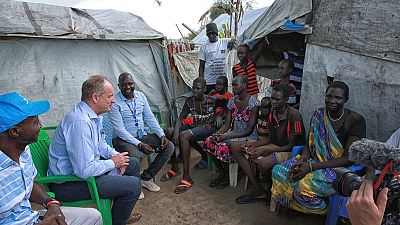 Nyarien Ochiek Yot and her five children fled their village in the far north of South Sudan to the United Nations protection site in Bor when her husband was killed during fierce fighting at the start of the civil war.

Six years on, her family wants to return to their home in Mankien as peace slowly descends on the country.

But she is nervous about whether the peace deal and ceasefire will hold in the wake of yet another delay in the implementation process.

“The people of South Sudan, including me, are hoping for peace. Peace is the only thing that can make this country stable,” says Nyarien Ochiek Yot. “But I do not trust the politicians and the military because they are the ones that always drag people to peace and, when they see peace, they drag people to war again. It feels hopeless.”

A peace deal was signed by the warring parties in September 2018. However, the implementation process has been slow with the plan to form a new transitional government now twice delayed.

The Head of the United Nations Mission in South Sudan, David Shearer, met with Nyarien Ochiek Yot and other families who want to leave the protection site to hear their concerns. He promised to help facilitate their travel home when they are ready to go but understands their uncertainty.

“People are anxious about the peace process. I think they would like to see more progress and, they told me, you know 100 days is not a long time,” says David Shearer. “We need to make rapid progress. We have to try really hard to put the political will in and move things forward.”

Despite Nyarien Ochiek Yot’s concerns about the peace process, she has enough confidence to return to her home and rebuild her life.

While the peace process between warring groups locally is progressing well, devastating floods that struck the region last month are proving to be another disincentive for displaced families wanting to leave the camps and return home.

Homes, crops and basic services, like water supplies, have been damaged or destroyed by the rising water. Local authorities are asking for help from the international community.

“We need services. We need medication. We need food and plastic sheets as well as mosquito nets,” says Jonglei Governor, Maker Thiong Maal. “These are the things that we need now because, in the country here, we don’t have any factories to produce the goods that we need to cover the gaps. We are very vulnerable and hope the world community will stand with us.”

Humanitarian agencies have launched a massive emergency response plan, reaching hundreds of thousands of people in need across the Jonglei region.

But efforts to implement the peace agreement also need to be accelerated so that people have the trust and confidence they need to go home.

“No one I’ve spoken to wants to go back to fighting. In fact, they’re absolutely adamant they don’t want to fight,” says David Shearer. “I think what we’ve got to do now is take the voices from here and tell those who are negotiating down in Juba to move forward because people want to go back to their homes and get on with their lives.”

Download logo
The Head of UNMISS, David Shearer, visits a displaced family in the UN protection of civilians site in Bor