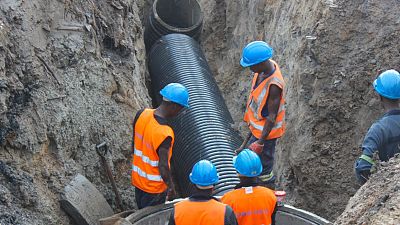 “Sometimes, it looks to me like surgery in the belly of an ancient beast,” says Herbert Chinokoro, senior water and sanitation engineer at the African Development Bank’s Country Office in Lusaka, Zambia.

He is describing the scene along the streets of the capital, Lusaka, where earthmovers and excavators were digging out disused water pipelines from a major trench and replacing them with new and more durable tubes.

The works form part of the $243 million Lusaka Sanitation Program (LSP), funded jointly by the African Development Bank (www.AfDB.org), the European Investment Bank, German Development Bank and the World Bank. The project is being executed under the Lusaka Sanitation Master Plan, which aims to provide citywide sanitation services by 2035 and transform the lives of more than a million Lusaka residents by 2021.

The Lusaka Water and Sewerage Company (LWSC), which is implementing the program, says about 7,000 households in the George, Kanyama and Chawama suburbs of the capital will benefit from improved sanitation. The objective is to increase access to sustainable sanitation services to the city’s two million residents, especially low-income households, and strengthen LWSC’s capacity to manage sanitation services.

“Lusaka is a relatively flat city and suffers from a recurrent sanitation crisis that continues to claim lives through annual outbreaks of cholera, typhoid and dysentery. There is also persistent environmental pollution,” says Chinokoro.

An estimated 70% of Lusaka’s residents live in peri-urban areas, which are relatively high density, unplanned neighborhoods, largely comprising lower-income residents. About 90% of these townships rely on substandard pit latrines which pose health hazards to the communities. Others use sewers, septic tanks or defecate in the open.

Chinokoro says 57% of Lusaka’s water supply comes from shallow wells, which is prone to contamination from the pit toilets and through fissures in the underlying rocks. “The most vulnerable areas are the low-income neighborhoods, making sewerage an attractive sanitation option. Poor management of solid waste and storm water drainage further compound these problems,” he says.

LWSC sanitation engineer Mwansa Nachula says the sanitation program will improve sanitation facilities and prevent water-borne diseases. “Pit latrines in Lusaka are actually occupying more space than water points and there are a lot of shallow wells and dugouts sited very close to the pit latrines, which makes for easy contamination of the water,” she says.

The sewerage work is only the more visible part of an intense and person-to-person sanitation campaign in the townships. The aim is to protect the groundwater from contamination by building improved toilets with fully lined substructures that prevent leakage of waste.  “These structures include seat or squat toilets, super structure with customers’ choice of brick or block; render and paint, door and door latch, among other options,” says Nachula.

In a sprawling township called George Compound, which has the new toilet structures dotted across it, Clara Malumba shows off her new facility, erected steps away from her door and a water standpipe. “There is no whiff here. The pit is lined with cement and plastic, so it does not leech into the groundwater. My kids love it,” says Malumba.

Another resident, Ruth Phiri, is also proud of her new toilet, which she shares with a neighboring household, which is yet to build its own. Both toilets are beautifully painted. A Bank-funded program trains men and women from this community to design and build these structures as a full-time business, thereby providing jobs to the local people.

“It is in these compounds that the battle for improved sanitation in Lusaka will be won or lost, and we seem to be winning,” says Chinokoro. “The first hurdle is getting the ordinary people to see their interest in what you are proposing, and we seem to have achieved that goal. Now they will respond more to pressure from neighbors,” he says.