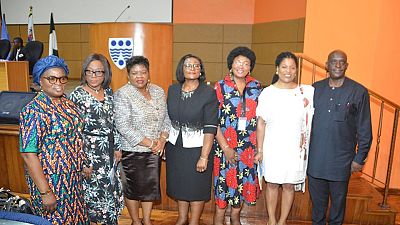 The Lagos Secondary Schools Model United Nations (LASSMUN) conference has called upon governments and Habitat Agenda Partners to develop strategic responses to the problems of sustainable urban development and requested international agencies to facilitate the access of cities to climate change mitigation and adaptation financing.

This was one of the resolutions adopted at the First Session of LASSMUN conference organized by the United Nations Information Center (UNIC) Lagos in collaboration with Lagos State Education District III which was attended by over 500 delegates from 132 public schools.

In his message delivered by the Director of the United Nations Information Center (UNIC) Lagos, Mr Ronald Kayanja, the United Nations Secretary – General Antonio Guterres thanked  the delegates to the conference  for getting involved in some of the biggest issues of our time such as peace, climate action, sustainable development and human rights.

“Climate change is an existential threat and the defining challenge of our time. You are the first generation to grow up in the shadows of climate change and the last who can prevent its worst consequences. The world needs your strong engagement to increase ambition, to cut emissions and to hold leaders to account” he said.

In her address to the delegates, the Permanent Secretary and Tutor General of Education District III, Dr Mrs Olufolayimika Ayandele  expressed her gratitude to UNIC Lagos,  Lagos State Ministry of Education, Principals of the schools, and the  delegates for supporting this initiative, which she said was a unique moment for the students with the opportunity to engage and learn about diplomacy, international relations and the United Nations.

The theme for the Conference was “Make Cities Safe Resilient, Inclusive and Sustainable”.