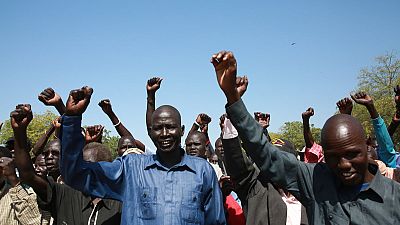 Bul D. Gai happened to be paying a quick visit to family in Juba in 2013 when the city suddenly erupted in a firestorm of violence between South Sudanese government and opposition forces.

He joined tens of thousands of others who fled for their lives to United Nations compounds seeking sanctuary from the conflict.

“I was escaping for my life. Me and my family,” says Bul D. Gai. “We went to the protection site because people were trying to kill us.”

The now 24-year-old remained in the United Nations Protection of Civilians site in the country’s capital for four years, until he decided it was safe enough to return to his home in Lankien, located in the northern Jonglei region.

I came home because I knew the peace process was underway,” he says.

The signing of a peace deal in September 2018 has resulted in a significant reduction in political violence around the world’s youngest nation. This has encouraged at least 600,000 people to return from refugee camps or protection sites to their homes across the country.

For those returning to Jonglei, efforts to rebuild their lives have suffered a serious set-back after heavy rains caused devastating floods which wiped out homes and crops and damaged basic infrastructure, including contaminating bore-holes.

“Ten thousand primary school children have been forced to stop learning because they’ve been displaced and their schools are flooded,” says Bieh Governor, Simon Hoth Duol. “There are signs of famine and starvation in the making across the state. We are calling on the UN and South Sudan humanitarian donors to commit some of the limited resources they have to respond to this crisis.”

The Special Representative of the Secretary-General and Head of the United Nations Mission in South Sudan paid a flying visit to the area to see first-hand the dire humanitarian situation.

Members of the UNMISS human rights team are also in town for three days working to educate high-ranking opposition military officers about an action plan to prevent conflict-related sexual violence. The training session is just part of the Mission’s efforts to encourage reconciliation and build peace.

This community, located in opposition-held territory, welcomed the recent 100-day extension to the peace process as an opportunity to ensure that adequate security arrangements, including the unification of armed forces, are in place before a new government is formed.

As part of the process, they want the Leader of the Sudan People’s Liberation Army in-Opposition, Dr. Riek Machar, freed from what they call “confinement” in Khartoum so that he can actively participate in the peace process and the future unified government.

For the citizens of Lankien, it is also a priority to resolve ongoing long-standing animosity between Murle and Lou Nuer communities, which has resulted in cycles of cattle raiding and revenge attacks.

“I want our people to be a peaceful family,” says Bul D. Gai. “Everyone should be able to enjoy good education and healthcare and live freely across the whole land.”