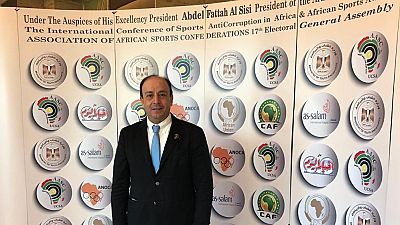 The 17th electoral General Assembly of the Association of African Sport Confederation (AASC) confirmed on the 9th of December its President Ahmed Nasser M.K. Mohamed and elected his Executive Board for the coming four years. AASC Vice Presidents are Taher Mesbahy and Penninah Kabenge and the Executive Board Members are Khaled Muhalhal, Elizabeth King, Khaled Babbou, Estony Charmaine and Fouad Maskout.

At the same time the International Conference of Sports Corruption in Africa and the African Sports Award took place in Cairo, Egypt. The event was hosted under the auspices of His Excellency President Abdel Fattah Al Sisi, President of the Arab Republic of Egypt.

For Rugby Africa this is an important representation on the continental level and Khaled Babbou, President of Rugby Africa, stated: “I am very pleased that the General Assembly re-elected me to the Executive Board of AASC and I wish to thank all members for their continued trust and support. For Rugby Africa in particular, this is a great opportunity to be at the table of this important African Association. We are the fastest growing sport on the continent and our representation at the African Games, Mediterranean and Regional Games is crucial for a successful strengthening of rugby and sports in general. AASC plays a key role in relationships with sport governing bodies and among others, the Association of National Olympic Committees of Africa (ANOCA) and its President Mustapha Berraf. I am looking forward to drive the promotion and development of sport in Africa through my presence at the AASC Executive Board.”

Download logo
Khaled Babbou, President of Rugby Africa, has been re-elected as Executive Board Member of Association of African Sport Confederations (AASC) at its 17th Electoral General Assembly in Cairo, Egypt on December 9, 2019