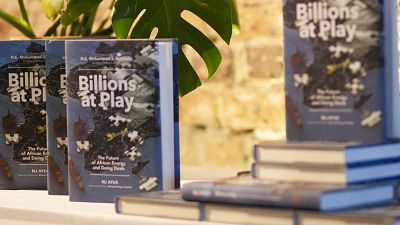 The English version of the book was launched early last month and has since become a huge success on the African continent and abroad.

With a foreword by H.E. Mohammad Sanusi Barkindo Secretary-General of the Organization of Petroleum Exporting Countries (OPEC) who describes the book as “a detailed roadmap” of how Africa can utilize its petroleum resources to fuel the growth and development of its economies, Billions at Play takes the public and private sector to task in areas where they fall short in managing and developing the energy sector as a key driver of economic growth.

From the onset, in the first chapter titled It’s High Time for African Oil and Gas to Fuel a Better Future for Africans, author NJ Ayuk takes a frank approach in revealing the fortunes, misfortunes and areas of improvement in the management of the sector.

“Petroleum resources have always represented opportunity for Africans. Again, the problem has been a failure to leverage those resources wisely to develop and capitalize on their value chain, and to protect the interests of everyday Africans where oil and gas revenue is concerned,” writes Ayuk.

The book features chapters on the importance of empowering women to take leadership roles in the sector, the rise of natural gas a key solution to the continent’s power supply issues, the importance of intra-Africa cooperation, local content policy development and implementation, the significance of good governance and American investment in Africa’s oil and gas sector.

“Among other things, Ayuk believes Africans need to have better control of their resource wealth—specifically the riches that lie in the continent’s largely unexploited oil and gas basins. At the same time, he knows Africa is not completely ready to go it alone,” reviews Ann Norman, General Manager for Sub-Saharan Africa at Pioneer Energy.

As described by http://bit.ly/2LDh9y0, Billions at Play is a comprehensive but entertaining look at Africa’s oil and gas present and future. To this, the book has received praises from global industry players for its solutions-based viewpoint. “In NJ Ayuk's world, there are few villains, just people and businesses who can and need to do more,” said Bruce Falkenstein, Joint Operations Manager of License Management & Compliance for LUKOIL. In tune with Falkenstein, Jeff Goodrich, former CEO of OneLNG said, “Ayuk puts forth a number of realistic solutions that anyone who cares about making Africa more self-sufficient will be eager to hear.”

While Dr. Thabo Kgogo, former CEO of Efora Energy Limited applauded Ayuk for his straight-forwardness and noted its importance, particularly as Africa’s energy sector undergoes a period of transformation, “Ayuk calls it like it is. For example, not everyone is willing to assert that Africa will never achieve its full potential if it cannot power its industries, services, or households. He also makes it clear that the state-run utilities are so saddled by debt they can barely recover their operating and capital costs, much less make the kinds of infrastructure investments needed to bring electricity to the continent,” he said.

The book is available for purchase in English and Spanish in hardcover and Kindle on https://amzn.to/33T0gWx.

About NJ Ayuk:
NJ Ayuk is a leading authority in the African energy sector and a strong advocate for African entrepreneurship and the indigenous energy sector, NJ Ayuk is recognized as one of the foremost figures in African business today. A well-known dealmaker in the petroleum and power sectors and founder of a leading energy focused law firm, NJ is dedicating his career to helping African entrepreneurs find success and to building the careers of emerging African talent.

As Executive Chairman of the African Energy Chamber and CEO of Centurion Law Group, NJ strives through his work to ensure that business, and especially oil and gas, impacts African societies in a positive way and drives local content development.

He is the author of Big Barrels: African Oil & Gas and the Quest for Prosperity and Billions at Play: The Future of African Energy and Doing Deals.

NJ graduated from the University of Maryland College Park and earned a Juris Doctor from William Mitchell College of Law and an MBA from the New York Institute of Technology.