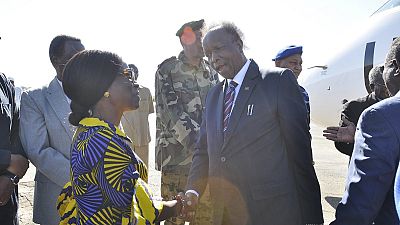 African Ambassadors accredited to Sudan from 3 to 4 December, visited El Fasher, North Darfur, where they met with Government officials, UNAMID senior management and representatives of the Internally displaced Persons (IDPs) from ZamZam camp. During these interactions, the African Ambassadors discussed various issues related to security situation in the state, the on-going reconciliation process, the voluntary return of IDPs to their places of origin, lack of education and health services in the state.

Upon arrival in El Fasher, the delegation paid a courtesy call on the Wali (Governor) of the North Darfur state. They were received by the Secretary General of North Darfur state, Mr. Mohamed Ibrahim, who represented the Wali. During their interaction, the Kenyan Ambassador to Sudan, Mr. Arown Suge, who was also the head of the delegation, touched on the security situation in Darfur and the progress made by the state and transitional Government of Sudan in collaboration with UNAMID, particularly the efforts made for voluntary return of IDPs to their places of origin. Mr. Suge called on the international community to support Sudan during this transitional period, especially the delisting of the Sudan from the list of states sponsoring terrorism. “We also urge the Darfur Armed Movements to come now to join peace talks with the transitional Government to end the war and reach a comprehensive peace agreement. The peace which will come to Darfur is peace for Sudan and the whole region,” Mr. Suge emphasized.

In his remarks, the Secretary General of North Darfur state, Mr. Mohamed Ibrahim, highlighted the importance of the African Ambassador’s visit to assess the situation in North Darfur and commended the African countries for their continued support to Sudan, particularly in the rehabilitation of the returnees’ villages with specific focus on the urgent need for basic services such as water, health and education.

The delegation then visited the newly inaugurated Human Right Resource Centre in the town where Mr. Mohammed Adam Bakhit, the representative of students at the Faculty of Law at El Fasher University, expressed the student’s appreciation to UNAMID and UNDP for establishing the Human Rights Resource Center, which he said will help in building the capacity of the student and serving the local community in North Darfur stating that the Center will promote human rights principles among the people of Darfur, regardless of their background. “We commend the partnership between UNAMID and the Faculty of Law at El Fasher University and urge the Mission to conduct regular seminars and workshops for the students to achieve the higher human rights objectives,” Mr. Bakhit stated. The Human Rights Resource Center was constructed through financial support provided by UNAMID and UNDP through the State Liaison Functions (SLFs) Project.

At the end of the day, the African Ambassadors’ delegation met with representatives of IDPs from the Zam Zam Camp, where IDPs used the opportunity to highlight their concerns regarding the security situation, shortage of food and lack of education and health services in the Camp. Daoud Morsal, one of the Zam Zam IDPs representative, explained that the IDPs still are suffering, because the political change that has taken place in the rest of Sudan is yet to impact their livelihoods in the Camp. “We are willing to return to our places of origin, but we need security and basic services in these areas”, said Morsal.

In his remarks, the Chargé d'Affaires of Rwanda embassy to Sudan, Mr. Shyaka Ismail, thanked the IDPs for their patience during the difficult conflict period they have endured over the years urging the IDPs to draw lessons from the past situation in Rwanda where affected people eventually managed to “overcome these difficulties without forgetting their past, but through working together and forgiveness as part of the reconciliation process, they have succeeded in developing their country beyond people’s expectation.”