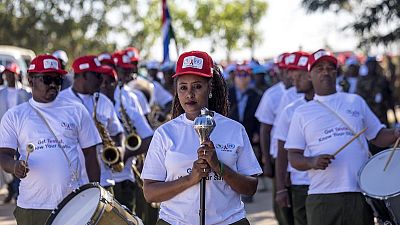 UNAMID peacekeepers (civilian, military and police), participated in a march and observed a minute of silence in remembrance of those who have lost their lives to this disease. Additionally, all attendees lit a candle in a symbolic gesture of solidarity to pay tribute to the people living with HIV and AIDS as well as their caregivers and supporters.

UNAMID Force commander, Lieutenant General Leonard Ngondi, read UN Secretary-General António Guterres’ message of the Day, in which he stated that ending the AIDS epidemic by 2030, as committed in the Sustainable Development Goals, will require a continuous collaborative effort.

“A record 38 million people are living with HIV, and resources for the response to the epidemic declined by $1 billion last year. More than ever we need to harness the role of community-led organizations that advocate for their peers, deliver HIV services, defend human rights and provide support,” said Guterres.

In his remarks, Mr. Joseph Gernal, Head of the Mission’s HIV/AIDS Unit, emphasized that communities are the lifeblood of an effective AIDS response and an important pillar of support to government programs as well as to international cooperation.

“As members of the peacekeeping community, it is part and parcel of our mandate to curb the transmission of HIV and promote as well as advocate for the end of AIDS by 2030”, said Mr. Gernal.

World AIDS Day is celebrated around the world on December 1st each year to raise awareness, commemorate those who have passed on, and celebrate victories, such as increased access to treatment and prevention services.