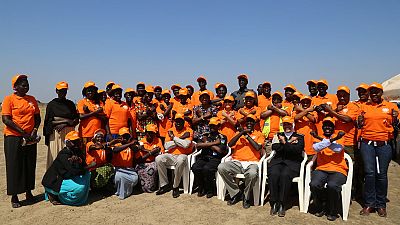 The United Nations Interim Security Force for Abyei (UNISFA) in collaboration with Women Associations of Abyei and Diffra held activities in the two locations to launch the 16-Days of Activism against gender-based violence campaign on 25 November 2019. The campaign runs from 25 November to 10 December under the theme of “HeForShe – Men Against Gender-Based Violence”. The theme was decided upon by the women from Ngok Dinka and Misseriya communities to engage men in the fight against gender-based violence (GBV).

The campaign launch included the reading of the UN Secretary General’s speech by Mary Gahonzire, UNISFA's Deputy Police Commissioner, in Abyei and Mr Alexander Rose, UNISFA's Principal Officer, during the event in Diffra. Both conveyed the message of UNISFA’s Acting Head of Mission/Force Commander (Ag. HoM/FC) Major General Mehari Zewde Gebremariam in which he noted that the fight against GBV in Abyei was a journey which he hoped would end by 2030 in line with the UN’s target to end violence against women. The Ag. HoM/FC further encouraged community members to report GBV through established mechanisms and share information with UNISFA and UN agencies in Abyei in a timely manner. The Principle Officer called for concerted action by every member of society to help eliminate violence against women.

The women leaders from both Abyei and Diffra expressed their gratitude to UNISFA for its support towards women’s empowerment, protection, and efforts to promote their human rights in Abyei area. They also highlighted the importance of preventing violence against women and girls and called on community leaders to join efforts and the campaign towards the prevention of violence against women.

Women leaders and a civil society representative from Diffra further requested the international community for support in terms of access to education, economic empowerment, and improved healthcare for women and girls.

The Abyei Chief Administrator and the Acting Paramount Chief in their remarks noted the importance of the 16-Days of Activism campaign and called for the commitment of all community members in the prevention of GBV and also called for equality between men and women at all levels. The Chief Administrator acknowledged the presence of GBV in Abyei area and called for the apprehension of perpetrators. A civil society representative from Diffra highlighted the need to promote gender equality with men and women as equal partners in the community. The Abyei Acting Paramount Chief closed the event in Abyei by calling on everyone to join the campaign and other efforts towards prevention of GBV.

This year’s launch of the campaign is marked by UNISFA’s call for “meaningful, inclusive and comprehensive actions” across all levels of society to empower communities and individuals to take steps to end GBV. UNISFA in partnership with Women Associations, local and traditional leaders, youth and civil society in Abyei area raised voices together to demand that the prevailing discriminatory attitudes and practices impeding the advancement of women be challenged in order to end GBV.

Other activities included dissemination of GBV information fliers to some 400 persons, songs and drama presentations depicting GBV in Abyei including a presentation by children, and presentation of Ashenda aid to some 20 vulnerable women in Abyei and 20 others in Diffra from funds collected by the Ethiopian Military during the Ashenda Ethiopian celebration in Abyei area. UNISFA also donated 600 jerry cans and 600 mugs to women associations as well as civil society organizations for distribution to community members.