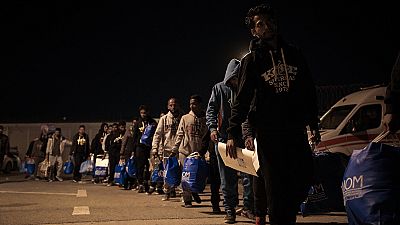 The flight with 152 men aboard left Misrata on Wednesday bound for Dhaka’s Hazrat Shahjalal International Airport where they were met by IOM Bangladesh staff. The Organization worked closely with the Government of Bangladesh and the Libyan authorities to facilitate their safe return.

Mohammed Akmal, 38, who suffered shrapnel wounds during an airstrike on the factory where he worked earlier this month, told IOM staff that he wanted to thank his former employer for paying his hospital bills and IOM for getting him home.

“When I woke up in the hospital, I could not believe I was still alive. I could only think about my wife and children in Bangladesh,” he said.

Supported by the European Union Trust Fund, returnees will also receive reintegration assistance to help them restart their lives. Since 2015, over 1,400 Bangladeshi migrants have returned home through the VHR programme.

Mohammed Rahman, a former student who quit his studies in Bangladesh to find work in Libya, said friends persuaded him to try and reach Europe. After surviving freezing temperatures and the terrors of the open sea, their vessel was returned to Libya by the coast guard where he and others were sent to a detention centre.

“I had no money, so I decided to return home,” he said. “I am happy that I am still alive and excited to return. I will complete my studies, graduate within a year and then start working.”

IOM Bangladesh Chief of Mission Giorgi Gigauri described voluntary humanitarian return and reintegration as “one of the most important services provided globally by IOM” adding that the stories told by the two men were not exceptional.

“These migrants found themselves in perilous conditions in Libya and desperate to get back home. We supported their return, ensuring their safety and dignity. We will also extend our support to help them achieve sustainable reintegration.”