Ouma set for Debut as Lionesses Squad to Dubai Named 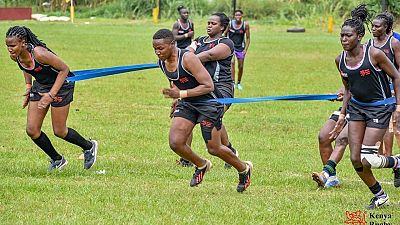 Homeboyz forward Enid Ouma has received her maiden call up as the Lionesses squad to the Dubai Sevens was in Nairobi on Thursday morning.

Ouma has been an integral part of the larger Lionesses squad especially after focused shifted from 15s to 7s in September. Head Coach Felix Oloo is keen on expanding the player base as part of the team’s preparations for the HSBC World Sevens Series and ultimately the Tokyo 2020 Oympics.

She joins a squad of experienced players who have been in the Sevens set up and have participated in International Sevens Series. Oloo has made only one change from the team that qualified for the Tokyo Olympics in October during the Africa Women7s as Janet Owino misses out on this assignment.

The team has been training for five weeks and there have been massive improvements in the set pieces, open play and general game understanding. “It’s great to have Michelle Omondi back in the team as well as Enid Ouma who is up for her sevens debut. The competition in the team is also a notch higher and the players are hungry for the game,” said Felix Oloo.

The strength part of their training has been implemented and the Management is proud of the results seen during training. Their focus during the last two weeks has been the SAQs and game demands conditioning since they approach the final block of conditioning pre-Dubai7s.

“The girls have been in high spirits especially after qualifying for the Olympics and all the training sessions since we resumed have been full of energy. I strongly believe the team will have fully acquired the ability not only to compete with the Internationally recognized teams but also to do extremely well as per the modern day International Sevens standards,” concluded Njogu, the Lionesses Strength and Conditioning Coach.

Download logo
Enid Ouma (extreme right) warms up ahead of the Lionesses Elgon Cup clash against Uganda on 13 July 2019 in Kampala, Uganda