Africa to Double Natural Gas Production by 2040, Global Consumption to Double by 2050 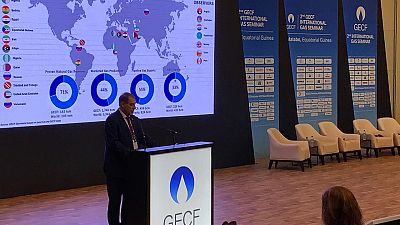 At the opening of the 2nd International Gas Seminar of the Gas Exporting Countries Forum (GECF) on Wednesday, global natural gas use was slated to double by 2050; replacing more traditional fossil fuels and facilitating an energy transition towards sustainable development.

According to the GECF’s Global Gas Outlook Model, natural gas will be the only hydrocarbon source to increase its share in the global energy mix, remaining the fastest-growing fossil fuel. GECF member countries currently represent 71% of natural gas reserves, 44% of marketed gas production, 55% of pipeline gas trade and 53% of LNG trade globally.

“Our main message is that natural gas is the destination fuel and will play a central role in energy transitions. We continue and will continue to defend the position of the Forum on benchmark prices, stressing that oil indexation is still the optimum choice for buyers and sellers of gas,” H.E. Yury Sentyurin, Secretary General of the GECF, said during the Seminar on Wednesday.

The African continent is set to increase its presence in the global energy sphere, more than doubling its natural gas production by 2040 and altering the global energy supply mix in the process. Africa will contribute as much as 9.2% to global natural gas production by 2040, resulting in an expansion from 255 bcm to more than 505 bcm and corresponding to a compound average annual growth rate of 3.4%.

“Natural gas will continue to be in demand and will help us meet the objectives of sustainable development and the energy transition for our country, for Africa and for the world,” noted H.E. Gabriel Mbaga Obiang Lima, Minister of Mines and Hydrocarbons of Equatorial Guinea. “We are working on the gradual implementation and exploration of various gas fields. All of the work that we are doing is in line with the policies that the international community is asking us to have for fossil fuels. We want to protect the environment and provide for the needs of remote communities in rural Africa.”

Following the keynote addresses, a panel discussion was held on the geopolitical context of natural gas development, focusing on the necessity of infrastructure, cost competitiveness, environmental sustainability and regional integration in capitalizing on global gas reserves.

“Natural gas is growing to become the fuel of choice globally,” stated H.E. Dr. Seyed Mohammed Hossein Adeli, Head of the Iranian Delegation. “The share of gas in the energy mix used to be 18%. Currently, it is 23% and has the prospect to increase to 26% in the next couple of decades. Gas is replacing coal and oil. Coal represents 26% and will be down to 17-18%. Oil is now dominating at 32% and is going to be down to 25-26%. This goes mostly to gas and renewables.”

The 2nd International Gas Seminar is held today as part of the Gas Exporting Countries Forum 5th Gas Summit this week in Malabo. The Seminar is organized by Africa Oil & Power and is part of the Equatorial Guinea Year of Energy.