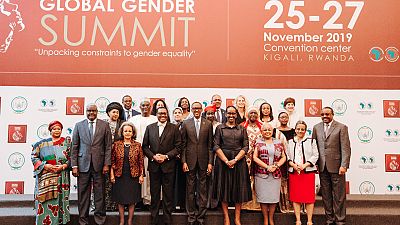 ‘There is no template to follow…we (women) can deliver but we can deliver differently” – President Sahle-Work Zewde, President of Ethiopia; ‘We are making sure that narrowing this gender gap is everyone’s responsibility,’ President Paul Kagame of Rwanda; “This discrimination is political, economic and social; it is politically incorrect, unjustifiable socially.’ – Chairperson of the African Union Commission Moussa Faki Mahamat; ‘A smarter world must invest in women and girls. Let’s be smart and let’s be wise. Women are the best investment any society can make,’ Dr. Akinwumi Adesina, African Development Bank Group (https://www.AfDB.org/).

The 2019 Global Gender Summit, the first to be held on the continent, kicked off on Monday with a strong call to surge ahead on gender issues and move from commitment to action.

Africa’s only female President, Sahle-Work Zewde of Ethiopia, said Ethiopia’s parliament is one of the only two on the continent with over 50% gender parity in seats, and women currently hold key ministerial roles in defense and national security for the first time. Despite her own country’s huge advances, however, the work has just started, she said.

Zewde was speaking during the opening plenary of the Global Gender Summit, a biennial event organized by the multilateral development banks (MDBs), bringing together leaders from government, development institutions, private sector, civil society, and academia.

The Summit is taking place in Kigali Rwanda from 25th to November 27th.

“There is good momentum for women and African women, but the work has just started…‘There is no template to follow…we (women) can deliver, but we can deliver differently,” President Zewde said.

President Paul Kagame of Rwanda, who officially opened the Summit, described gender equality as “real commonsense.” Rwanda leads the word in gender representation in parliament with 61% of its parliamentarians being women — the highest in the world. In addition, half of all ministerial positions are held by women, just like in Ethiopia.

“We got it from the beginning that there is a lot of work to do…made investments to ensure that women are at the center of development. We are making sure that narrowing this gender gap is everyone’s responsibility,’ President Kagame said.

“What we are telling our heads of states is to take the bull by the horns…This discrimination is political, economic, and social; it is politically incorrect, unjustifiable socially…not to take (gender) into account is a real waste.”

In Africa, 70% of women are excluded financially. The continent has a $42 billion financing gap between men and women. And women, who are the majority of farmers, face a financing gap of close to $16 billion.

“The challenges are not just about gender. They are about under-representation and lack of empowerment of women,” African Development Bank President Akinwumi Adesina said.

“A smarter world must invest in women and girls. Let’s be smart, and let’s be wise. Women are the best investment any society can make,’ he added.

The African Development Bank is doing its part to transform the financing landscape for women with the launch of the Affirmative Finance Action for Women in Africa (AFAWA). AFAWA aims to mobilize $3 billion of new lending by banks and financial institutions for women in Africa. G7 leaders approved a package totaling $251 million in support of AFAWA during the summit in August.

Welcoming the conference participants, Rwanda’s Minister of Gender and Family Promotion, Soline Nyirahabimana, said the Kigali Conference center was set to glow orange in honor of the 16 Days of Activism against Gender-Based Violence. The 16 days kick off on November 25th, each year, which marks International Day for the Elimination of Violence against Women and runs until December 10th.

The 2019 Global Gender Summit is attended by the first ladies of Rwanda and Kenya as well as representatives of the heads of state of Gabon, Mali, Senegal, Chad and the King of Morocco. Also in attendance are ministers of genders from Niger, Somalia, Senegal, South Sudan, Tunisia, and Libya.

The Summit runs from 25th to 27th of November under the theme: ‘Unpacking constraints to gender equality.’