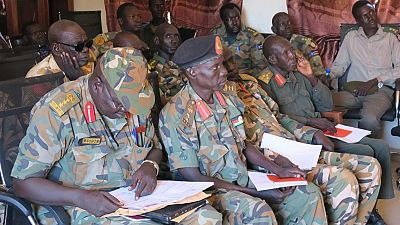 High-ranking military officers from the government army, the main opposition force and the South Sudan Opposition Alliance have undergone training on understanding the legal framework of the protection of children.

“It is a gesture of reconciliation that we are moving together, disseminating messages of peace and making sure that there are no children affiliated to any armed group,” says Major Kevin Kueth, who travelled from the government forces’ HQ in Juba to attend the workshop in Aweil.

A revitalized peace agreement was signed in 2018 and has brought hope to many South Sudanese. They are anticipating relative peace, calm and a chance to return to their homes.

“By working together we build confidence among the warring forces,” said Brigadier General Okello Odong of the South Sudan Opposition Alliance while addressing his colleagues on the importance of not recruiting or using children. “The implementation [of the peace deal] is ongoing, and we are creating awareness about it,” he added.

The training, which brought together more than 40 military officers including four women, was supported and facilitated by the Child Protection Unit of the United Nations Mission in South Sudan.

“It is very important because we need to protect our children and how to do it,” said Major Malish Richard Joseph of the main opposition force.

In his remarks, Atkilti Hailu, a representative of the peacekeeping mission, asked the attendees a rhetorical question.

“As you know, your children are the future of this country. So, what do we do now? Do we arm them with guns to destroy the country or do we feed them with hope?”