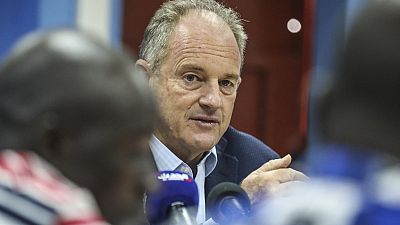 In Pibor, thousands of people watched as their homes were destroyed and crops washed away by heavy rains over the past few weeks.

Residents of this community in the Jonglei region of South Sudan are among 900,000 people affected by widespread destruction caused by flooding. An emergency humanitarian response is underway, but the devastation has exacerbated already immense human suffering caused by the five-year long civil war.

The Special Representative of the Secretary-General David Shearer highlighted the plight of those affected by the downpours. At the press conference in Juba, he also thanked donors for contributing millions of dollars to the aid effort.

However, he noted that, while the water will subside, real relief for the people of South Sudan will only come when durable peace is achieved.

A peace deal was signed in September 2018. The ceasefire brought a welcome reprieve from the political violence that has plagued the country since 2013. However, implementation of the agreement has been slow and, earlier this month, parties delayed the formation of a transitional government for a further 100 days, on top of a previous six-month extension.

“The extension has eased some anxiety – at least temporarily – because the ceasefire will be preserved, and the implementation of the agreement can continue,” said David Shearer. “But, at a grassroots level, some people are expressing disappointment, and even anger at the further delay. They told us that they are frustrated by what they see as a failure to unite the country despite the promises made and they are beginning to feel disillusioned.”

The head of UNMISS urged parties to accelerate efforts to implement the peace agreement and detailed areas that he believes needs to be urgently progressed.

“First, and most importantly, the key ingredient that is needed is political will. If the parties want to fully implement the agreement and form a transitional government, they can, if that will exists,” he said. “Second, on the reunification of forces, we need a substantial amount of progress to give all parties trust and confidence coming into a transitional government. The progress made will be a measure of the parties’ commitment to peace.”

Other issues highlighted by the Special Representative are the need for negotiation and political settlement of the number of states and their boundaries, and for steps to be taken to resolve the status of Opposition Leader Dr. Riek Machar, so that he can travel freely to Juba for peace talks.

The matter of resources needed to implement the agreement is also a major talking point among South Sudanese.

“We hear different figures from different sources about how much funding has been released,” said David Shearer. “Transparency is urgently needed…Essentially we believe a trust fund or something similar with independent oversight is needed.”

Such a mechanism would enable accountability and provide reassurance that supplies purchased are reaching cantonment sites. This is important because troops from the various armed forces are gathering at sites across the country, but a lack of food and medicine at some locations is giving them no choice but to leave and find somewhere else where their basic needs are met.

Mr. Shearer highlighted the critical role of the guarantors, Uganda and Sudan, in continuing to show strong leadership in keeping the parties on task.

He said the formation of a transitional government is important because it signals the beginning of preparations for elections.

“Elections provide the opportunity to resolve differences through democratic rather than violent means. They give citizens the right to select their own leaders and hold them to account,” said David Shearer. “That will, however, require political space – the freedom for parties to campaign, organize and, even, criticize. That environment does not yet exist.”

He added that there is a palpable desire for peace in communities across the country. People’s expectations are high because they want the opportunity to rebuild their lives and enjoy the prosperous future that they fought so hard for when they won independence eight years ago.

Download logo
On Wednesday, David Shearer, head of UNMISS, commented on a variety of issues at a press conference in Juba