H.E Richard A. Opembe, Ambassador-Designate Presents an Open Copy of His Credentials 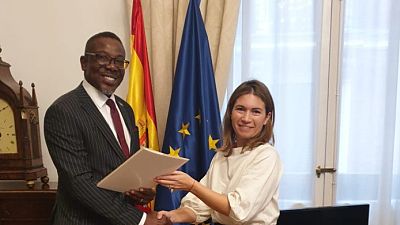 On 21st November 2019, H.E. Richard A. Opembe, Ambassador-designate to the Kingdom of Spain, presented the open copy of his credentials to the Office of the Chief of Protocol of the Spain’s Ministry of Foreign Affairs, European Union and Cooperation. He was received by the Deputy Chief of Protocol, Subdirector General of travel and official visits, ceremonies and ordinance, Ms. Maria Sebastian de Erice, on behalf of the Chief of Protocol (Ms. Caridad Batalla Junco). Ambassador Opembe was accompanied by Chargé d’ Affairés a.i Ms. Severine Luyali.

Distributed by APO Group on behalf of Embassy of the Republic of Kenya in Spain.
Media files