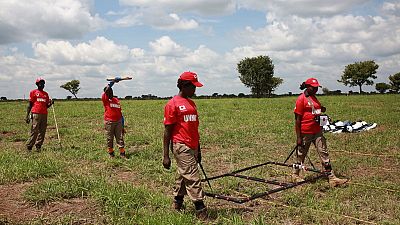 Magwi county was once home to a thriving agricultural community that produced staple crops like maize, beans, eggplants, tomatoes, and many others, which provided both physical and fiscal nourishment for its inhabitants and other communities.

“The first thing we used to hear our parents say is, ‘we are going to the garden,’ and they would stay there until late evening. Our people are agricultural people. We know nothing else,” said Nelson Lwak, a native of Pajok village in Magwi county.

Nelson comes from a proud family of farmers that have survived off their land for years. But after being displaced by fighting that engulfed the country in 2016, they were no longer able to practice their cherished tradition. Nelson himself has since moved to the capital Juba to pursue radio.

When civil war broke out in the 1980’s, in what was then still Sudan, many farmers in Magwi county and other parts of the south had their precious livelihoods stripped from them as their land was bombarded with explosive devices known as cluster munitions, rendering it too contaminated to work. By 2016, inter-ethnic conflict in present-day South Sudan had forced the majority of remaining farmers to flee to neighboring Uganda and Kenya in search of better economic opportunities.

The village of Amee, neighbouring Nelson’s Pajok, was one of the most heavily-hit in the area. Prior to the conflict, it had 860 farmers spread out across 86 hectares of land. The United Nations Mine Action Service (UNMAS), a specialised service of UN peacekeeping operations dedicated to clearing explosive remnants of war and spreading awareness of their dangers, has estimated that there are as many as 750 cluster munitions within the immediate vicinity of the adjacent community, of which up to 40 per cent represents an active threat to farmers.

Luckily, though, this reality is starting to change for them.

Recent funding made possible by the government of Japan has enabled UNMAS, in cooperation with the Mines Advisory Group, to begin surveilling and clearing an area covering 20 hectares in Amee, where numerous unexploded bomblets remain. Thirty-nine similar sites are expected to be explosive-free by next June.

Since 2006, the agency has made remarkable strides towards mine clearance in southern South Sudan, with 263 contaminated sites already rendered safe and 138 more to be cleared within the next three to four years.

This week, their progress was celebrated in Amee’s outskirts with a lively reception attended by representatives of the United Nations Mission in South Sudan (UNMISS), the embassy of Japan, and the government of the greater Torit area, along with many other rejoicing faces.

“Many more cluster munitions remain, and they are undoubtedly responsible for hundreds of accidents in this country, the most recent one occurring last March when three children died in Lainya. We are extremely grateful for the support of the people of Japan to clear here,” said UNMAS Senior Programme Manager, Richard Boulter.

Following a lively welcome marked by song and dance from the locals, UNMAS personnel walked participants through the meticulous surveillance and clearance process, which culminated in a live detonation demonstration that sent shockwaves through the atmosphere. All present were able to appreciate the careful expertise needed to fulfill such precarious tasks.

“Today we have witnessed very tedious work that our technicians are carrying out all over the nation and the communities here, especially. There are about 52,000 refugees from Torit who have been given new courage to return thanks to them,” said Torit Governor, Tobiolo Alberio Oromno.

Nearly 1.5 million South Sudanese have become internally displaced by conflict, and another 2.2 million have sought refuge in bordering countries. So many yearn to come home but are paralyzed by fears stemming from insecurity and a lack of safety guarantees. Their uncertainty is compounded by a sluggish peace process that has delayed the formation of a transitional government two times since the original date was set to do so last May. Programmes to bolster mine clearance, including along key roads, therefore play an important role in rekindling confidence in individuals like Nelson and his family to take the next steps to restart their lives.

“I have brothers that have never gone to school. One day, I want to start up a farm with them back home so they can put food on the table for their families and send their kids to school,” Nelson said.

His aspirations for a better future were shared by the Japanese envoy who was part of the delegation visiting that day.

“This nation is emerging from a long tunnel of uncertainty, and it is my hope that soon the light at the end will be seen. After that, the focus should be on nation-building, especially through promoting agriculture and education,” said Japanese Ambassador, Seiji Okada.

In closing the event, head of UNMISS David Shearer pledged the peacekeeping mission’s ongoing support in making South Sudan mine-free and getting it onto the road to prosperity.

“We hope to continue this process as we go further on so that everyone can feel safe to continue their agricultural pursuits and everything else that they want to do with their lives.”

Although South Sudan formally banned the laying of anti-personnel and anti-tank mines when it achieved independence in 2011, the use of cluster munitions remained prevalent during the war that broke out that same year. These munitions are an especially treacherous tool in warfare because they can be launched in large quantities and fragment upon impact, leaving behind a deadly trail long after the intended target has been hit. For this reason, the vast majority of countries banned their use with the adoption of the Convention on Cluster Munitions in 2008. Efforts from the international community continue to get South Sudan onboard with the agreement as well.