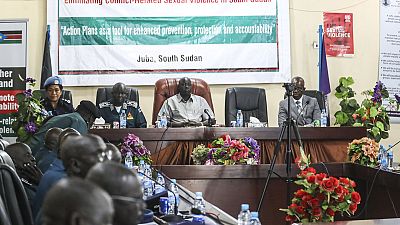 On Tuesday, a promise consensually conceived five years ago saw the light of day at a milestone event in Juba: a complete action plan for the South Sudan National Police Service on addressing conflict-related sexual violence in the country.

“We have been a bit late, but now we are participating, and we will ensure fair play,” commented James Dak Karlo, Head of the Special Police Units, when speaking about the specialized groups of personnel formed to investigate these lamentably common atrocities.

“Sexual violence has become epidemic in this country, and our police must take this action plan very seriously. Access to justice must be guaranteed for all, because impunity encourages others to commit these crimes,” he stated, thus mentioning a few pieces of the complex jigsaw puzzle that must be solved to address the problems effectively.

Directly or indirectly, the action plan, “a holistic roadmap” of “strategic and operational guidance” to eradicate the perpetration of conflict-related sexual violence by police officers and to contribute significantly to the reduction of such acts in general, encompasses all or most of the challenges that ought to be tackled.

The document alludes to cultural taboos and attitudes that nurture fertile ground both for engaging in sexual violence with impunity, and the stigma and social exclusion of survivors, mostly girls and women, of these heinous acts.

“This issue [sexual violence] is controversial in South Sudan. There is at times a lack of acceptance [of it being a crime] among some police officers who feel that targeting sexual violence is something that comes from the international community,” says Huma Khan, the senior women’s protection officer serving with the United Nations Mission in South Sudan.

She points out that the leadership of the country’s police force is on board and keen on taking strong action against these actions, including by means of holding its own officers accountable, but notes that the response outside of the capital is often less understanding. Pinpointing the difficulty of ensuring that the implementation of the action plan is not limited to Juba, she adds that “to engage, educate and sensitize” will remain a “constant challenge” for many years to come.

Guided by the Office of the Special Representative of the UN Secretary-General on Sexual Violence in Conflict, who in October 2014 signed a communiqué with President Salva Kiir committing the country to create action plans for its military and police forces, Huma Khan has given the government’s drafting committee significant technical assistance and advice in producing the landmark document.

So has Unaisi Bolatolu-Vuniwaqa, Police Commissioner of the UN peacekeeping mission, and while she shares many a concern expressed by Ms. Huma, she is also noticing definite signs of progress.

“What I have observed is that the South Sudanese police have now begun to arrest and take their own officers who perpetrate sexual violence to court, and I think that is a fruit of some of our technical assistance, and of course also of a commitment by the organization itself,” the Commissioner says, referring both to the extensive trainings in areas such as community policing, gender-based violence, child protection and investigation techniques provided by her colleagues and the “appetite” of national police officers to “embrace this new direction”.

Apart from the long-term endeavour of changing the long-held attitudes and customs that underlie a culture of non-accountability for perpetrators, other factors, not least funding and huge gaps when it comes to skills and know-how, also make the actual implementation of the action plan a daunting task.

“A lack of financial resources is the biggest challenge,” according to Major General Stephen Warikozi Zakaria, Chairperson of the committee which drafted the policy paper. He says most of the money will come from the government but adds that donor support will be needed as well as expected.

The peacekeeping mission and the United Nations Development Programme, a long-standing partner of the South Sudanese police, will have important roles to play in terms of capacity building, monitoring and evaluation and other components of the guiding document. Key words for the mission are prevention of and accountability for conflict-related sexual violence, as these tasks are well-aligned with its mandate.

Huma Khan, speaking at the event, emphasized another perspective of the major buzzword at the launch.

“Most importantly, it [the action plan] is a step towards accountability to the women of South Sudan,” she said, after mentioning that implementing its many activities will also go a long way to improve the country’s international image.

Describing the historic document as rather “perpetrator-focused”, both the senior women’s protection advisor and the UN Police Commissioner flagged that making the fight against conflict-related sexual violence “survivor-centered” is at least equally imperative.

“There is a part of the plan that talks about services, to whom the police should refer survivors [of these crimes]. We work hard on these issues to have a proper reference mechanism, which we share with the police,” said the former.

“Another starting point is reporting, whether survivors have the confidence to report [sexual violence] or not. The responsibility to create such a conducive environment really lies with the police,” the latter affirmed.

Research and experience show that such a trust-inspiring environment includes a sufficient number of female police officers to handle these sensitive cases. Yet, to the other list of challenges (mobility, medical kits, stigmatization due to cultural taboos) facing the Special Police Units, James Dak Karlo added “a shortage of women” in these specialized positions.

Major General Warikozi is aware of the problem, and part of the solution.

“As police officers, we are part of the local communities and we need to be very close and together with them, because they are the right hand of the police.”

Key points of the action plan of the South Sudan National Police Service:

Increase the proportion of female police officers at all levels.