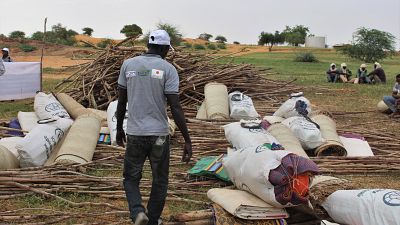 This November, the International Organization for Migration (IOM)’s emergency response project Emergency Humanitarian Assistance to Affected Populations in Tillabéry, funded by the Government of Japan, came to an end.

The nine-month project aimed to prevent the exacerbation of the already dire situation in the Tillabéry region by improving the living conditions of the crisis-affected population and increasing the communities’ resilience.

The northern part of the region of Tillabéry in Niger has been severely impacted by the situation in neighbouring Mali, which has faced ongoing conflict and insecurity since 2012.

This conflict has led to the displacement of more than 75,000 people, adding to the already existing refugee population of over 56,000 people in the regions of Tahoua and Tillabéry.

Over 1,250 emergency shelters and 1,250 non-food item kits have been distributed to 6,500 vulnerable individuals. Prior to the delivery of the emergency shelters, trainings were organized for displaced communities on how to assemble the shelters.

Since the beginning of the project in March 2019, the security situation in the region has continued to deteriorate with several attacks taking place in the region. Considering these incidents, the governor of Tillabéry suspended in May all movement to the region’s northern departments and stressed the need of military security escorts for any crucial movements in those areas.

These measures taken by the regional authorities led to the suspension of all humanitarian activities in May by the United Nations Resident Coordinator (UN-RC). The measure was then lifted in June with alternative solutions to military escorts found, such as humanitarian corridors allowing humanitarian actors to operate in a secured perimeter.

Before and during the implementation of the project, IOM worked closely with the Ministry of Humanitarian Action and Disaster Management (MAH) in Niger, the shelter and non-food item working group, Protection Cluster and local authorities, to determine the best course of action.

To implement the project’s activities in the region of Tillabéry, IOM partnered with local NGO Développement Endogène Durable et Innovation (DEDI), one of the few associations still operating in the conflict-ridden region.

“This project came at a crucial moment where no other organization had any access to these sites and these communities thought they had been forgotten,” said Edmond Soro, DEDI’s Director. “It has been challenging to implement this project because of the region’s inaccessibility, but it also been highly rewarding to be able to give these communities some hope for the future.”

The insecurity in the region has also affected the displaced communities’ access to basic health facilities and assistance. Following discussions with the Health Cluster and local health authorities, one of the key components chosen for the project was to carry out health activities for close to 8,000 displaced people living on three different sites in the department of Abala.

The department of Abala is currently the department with the highest number of displaced people in all of Tillabéry, hosting over 27,000 vulnerable displaced individuals.

Through IOM’s partnership with NGO DEDI, more than 5,000 children have been vaccinated and over 500 women have benefitted from pre-natal consultations. An additional 500 women and girls have received menstrual kits along with awareness-raising sessions on menstrual hygiene. Malaria prevention outreach sessions were organized, and mosquito nets and medication were also distributed during the length of the project.

Hadiza, 25, is one of the Nigeriens who fled the border region with Mal i and now lives on the site of Ikerfan in the department of Abala. Four hours prior to DEDI’s visit on the site, Hadiza had a miscarriage and was losing blood. DEDI and the accompanying local doctor treated her on site, and she managed to have a quick recovery.

“This project has brought some much-needed relief to close to 15,000 people,” said Barbara Rijks, IOM’s Chief of Mission in Niger. “There is an urgent need for basic assistance for these remote communities. Given the continued displacements in the region, international humanitarian aid is still needed to support the needs of vulnerable communities,” she concluded.