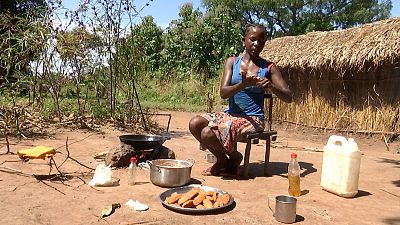 22-year-old Angelica Luka finds herself working long hours making pancakes, daily, yet her labour fetches only 1.5 dollars by the time she retires. It is the only way she gets to feed her three children.

“I’m doing this small business to provide salt and soap, and anything I might need like clothes and shoes for my family,” Angelica told a joint assessment team from the UN Mission in South Sudan (UNMISS), which had travelled to Tombura from Yambio, to monitor the situation on the ground following the extension of the pre-transitional period leading to the formation of a new government of national unity.

Tombura had been accommodating internally displaced persons from the neighbouring villages since the conflict erupted in South Sudan in 2013, including nearly 200 households that were received in the town earlier this year.

With the influx of internally displaced persons and the insecurity in the area, life became more challenging for people like Angelica Luka.

Yet, Angelica’s case doesn’t seem as dire as that of Angelina Anguei, one of the internally displaced persons who fled her home village after bearing witness to some unspeakable horrors. She is now hopeful that peace will return to her country.

“Our village was destroyed, some of our relatives were killed – we have been left on our own; all the elders were killed. I am praying to God that [the peace agreement] will be implemented for our country to be peaceful,” she said.

Indeed, this is what new efforts, including the trip to Tombura, are geared towards achieving.

Faith groups have been working in collaboration with the UN Mission to create conditions for peaceful coexistence among different communities in the area. So far, a lot has been achieved, including grassroots initiatives that resulted in the release of child soldiers earlier in this year.

“We were able to face the people in the bush and managed to bring out over 10,000 young men who were there, ready to kill; ready to fight. Many times, we were humiliated by these boys in the bush, yet we kept on,” said Bishop Hiboro, head of the Catholic Dioceses of Tombura and Yambio, and chair of the area’s interfaith group.

According to the bishop, combating hatred among the communities is high on the list of priorities.

Working with the people of South Sudan to build durable peace is a key part of the mandate of UNMISS.

“We want to have a dialogue between the communities on what they have,” said Christopher Muchiri Murenga, UNMISS Head of Field Office in Yambio, before enumerating some of the things they will be exploring.

“What are the opportunities for development in the communities; what are the challenges they face, what are the threats that they think that they can overcome and the strengths and weaknesses,” Mr. Murenga explained, noting that this would help “drive the communities towards building their own resilience as well as moving towards early recovery and development, now that the crisis itself is over,” he said.

For the people of Western Equatoria, long believed to be peace-loving people, the wait for durable peace and development cannot last any longer.