Commitment to a “Zero-Child Army” Trumps Differences During Juba Conference 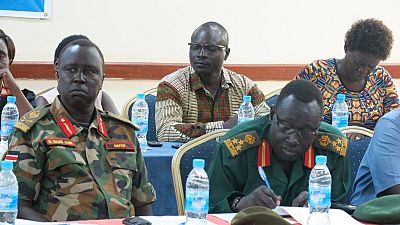 Although the converging of warring factions is normally not a good sign, a recent conference in Juba proved to be a significant exception when government and opposition forces met to discuss a matter that has been ravaging South Sudan for many, many years: the all too common presence of children in military ranks.

“A child is not a soldier,” affirmed Peter Alberto, chief of child protection for the opposition forces, adding that boys and girls should live at home and go to school.

Mr. Alberto’s sentiments were echoed by some 50 other senior officers in attendance at the three-day conference spearheaded by the United Nations Mission in South Sudan’s (UNMISS) Child Protection Unit and the United Nations Children’s Fund (UNICEF), which aimed to speed up efforts to make a “zero-child army” a reality.

While of utmost importance, achieving this goal won’t be easy. Near-chronic instability and insecurity brought on by years of inter-communal fighting, has forced many youngsters into the grips of armed groups as a way to escape poverty or to protect themselves from violence.

“Children need to be dissuaded from joining the military and should instead be motivated to be at school. The government needs to take more responsibility for the youth because they are the backbone of this country,” said Andrew Oluku, an officer with the National Disarmament, Demobilization and Reintegration Committee, one of the mechanisms borne out of past negotiations to help promote peacebuilding in the country.

Some comprehensive steps towards achieving a “zero-child army” policy outlined by participants included sensitizing junior officers to the importance of the issue, improving methods to identify recruits under the age of 18, and increasing efforts to find and release girls and boys currently enlisted. Facilitating the successful reintegration of the released was also recognized as a crucial aspect to bringing an end to the practice.

“This conference exemplifies the spirit of unity which we are all driven by,” said Major General Chaplain Khamis, chief of child protection for South Sudan’s government forces.

Representatives of the peacekeeping mission urged participants to work for increased transparency and pledged its continuous support to the creation of a child-free army.

“We are prepared to work together with all parties to ensure the professionalism of South Sudan’s armed forces. This can only work if we are open with each other,” said Alfred Orono Orono, head of the peacekeeping mission’s Child Protection Unit.