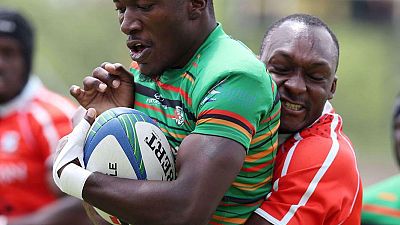 The Ghana Rugby (GhanaRugby.org) Eagles men’s sevens team duplicated the achievement by their women’s sevens team by winning the 2019 Rugby Africa Men’s Sevens Trophy in Brakpan-South Africa on Saturday 9 November 2019 when they convincingly beat Morocco with 33 to 10 points.

Earlier this year the Ghana Rugby Eagles women’s sevens team achieved a similar victory in Tunisia when they won the Trophy in Tunisia on 13 October 2019 by beating Zambia by 21 points to 14.

With this achievement, the Ghana Eagles improved their Rugby Africa ranking by moving from tenth to ninth position.

Due to the number of participants in this year’s men’s sevens tournament the format was changed to a first-round of elimination matches where Ghana missed promotion to the Cup section of the tournament when it lost to fifth-ranked Zambia in the first elimination match.

In the second round of pool matches, the Ghana Eagles managed to keep its hopes alive when it convincingly beat Mauritius by 43 points to 12.

The semifinal against new participants Ivory Coast was narrowly won when Ghana beat their neighbours by 19 points to 15.

The 2019 Rugby Africa Men’s Sevens Cup was won by Kenya by beating Uganda easily with a margin of 29 points. This also qualified Kenya for participation in the 2020 Japan Olympics Games.

Both Uganda and Zimbabwe who finished second and third still stand a chance of qualifying for the 2020 Tokyo Olympics if they win their repechage matches.

According to the President of Ghana Rugby, Mr Herbert Mensah, the Trophy win was due to a number of factors that included incredible hard work by the technical team and players, a revised pre-tournament camping programme and support from various parties.

“The Ghana Eagles worked extremely hard to put in an impressive performance on the day when it counted most.  It is unfortunate that the whole tournament could not be played on a pool basis but I am sure that the Ghana Eagles will be up to it to progress to the Cup stage in 2020 when it once again meets Zambia in the elimination stage,” Mensah said.

Mensah continued to express his appreciation to all parties who helped and supported the Ghana Eagles with their pre-tournament preparations in South Africa.

He said, “May I take this opportunity to thank the President of the Blue Bulls, Mr Willem Strauss, Mr Richard Janse van Rensburg and his Oryx Sevens team, Hotel 224 and its friendly staff and the President of the Brakpan Rugby Club, Mr Harry Nieuwenhuis, for the invaluable support they provided in preparing for this tournament.”

Mensah also said (https://youtu.be/L95D0jrqRgE) that Rugby is indeed big business and that the achievements by Ghana Rugby would not have been possible without the financial and in-kind contributions made by the Panafrican Equipment Group, Komatsu, Sunda International, Conserveria Africa through its Gino Brands, Interplast and last but not least the ANOCA via the Ghana Olympic Committee (GOC).

The year 2019 is far from over for the Ghana Eagles as they still have to face the Botswana Vultures in a crucial Rugby Africa Cup Elimination match on 23 November 2019 in Elmina-Ghana.