Over 40,000 Migrants assisted with Voluntary Return and Reintegration from Niger since 2015

This month, the International Organization for Migration (IOM) reached a milestone of 40,000 stranded migrants participating in IOM’s Assisted Voluntary Return and Reintegration (AVRR) programme from Niger to their countries of origin.

IOM’s AVRR programme in Niger began five years ago to respond to the need for stranded migrants to return to their homelands in West Africa.

Most migrants registered in IOM’s six transit centres since 2015 are from West and Central Africa, mainly from Mali (24%), Guinea (23%), Senegal (9%) and Nigeria (5%). Forty-three percent of the migrants assisted were young males between 18-24 years of age.

Nevertheless, as one of the largest transit countries feeding the Central Mediterranean Route, this migration path has often led to mistreatment, exploitation or abuse during their journeys. Once stranded in Niger, migrants are often unable to pursue their journey northwards or to return to their country of origin on their own.

In 2019 only, over 37,000 medical consultations were performed at IOM’s transit centres in Niger, with an average of 17 urgent medical cases per week.

These operations are organized in the frame of the EU-IOM Joint Initiative for Migrant Protection and Reintegration and the Migrant Resource and Response Mechanism (MRRM), supported by the European Union.

“This programme offers migrants in distress a dignified return and some basic assistance to get back on their feet in their country of origin,” declared Barbara Rijks, IOM’s Chief of Mission in Niger. “We are thankful for the Government of Niger, consulates, embassies and governments in countries of origin, and IOM missions who all work together to support migrants on this journey.”

MRRM is a comprehensive programme that aims to provide direct assistance to migrants in transit and carries out activities to promote viable alternatives to migration, to inform individuals about safe migration and to encourage activities that ensure that migrants can contribute to the economy in their country of origin.

Download logo
Over 40,000 migrants have been assisted with voluntary return and reintegration from Niger since 2015. Photo: IOM/Monica Chiriac 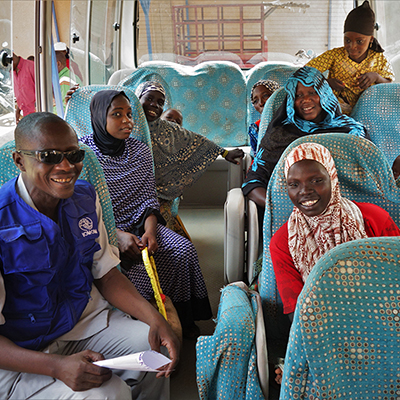