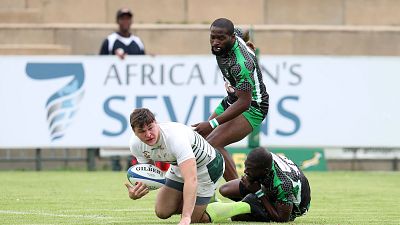 The first day of Africa Men's Sevens tournament which is sponsored by Société Général has come to an end in the city of Johannesburg, South Africa. The tournament is hosted by the South African Rugby Union and organised by Rugby Africa.

14 teams were in action as they looked to secure a place at the 2020 Tokyo Olympics and the World Rugby Sevens Series.

The defending champions Zimbabwe began their title defence with a victory over Nigeria in the first game of the day. The Southern Africans defeated Nigeria 24-21 in a tightly contested match.

Kenya, who are one of the favourites to win the tournament, also started their campaign with a win against Cote d’Ivoire. Nicknamed ‘Shujaa’, Kenya emerged 36-7 winners against the West Africans.

While Uganda produced a dominant performance to beat Mauritius 57-0, Madagascar defeated Botswana 38-12 in a battle between two Southern African teams.

Botswana's neighbours Zambia proved too strong for Ghana as they won 19-7, while Tunisia suffered a 26-21 defeat at the hands of Namibia.

The first-round matches concluded after Senegal recorded an impressive 29-17 victory against Morocco.

Tournament favourites Kenya and Zimbabwe were simply unstoppable on the day as they both recorded three wins out of three in order to keep their hopes of qualifying for the Olympic Games alive.

On the other hand, Mauritius’ hopes of reaching the global tournament ended as they succumbed to defeats to Ghana and Morocco having started the competition with a loss to Uganda.

While Cote d’Ivoire produced the shock of the day when they defeated a much-fancied Tunisia side 26-5 in an enthralling encounter.

The matches are set to continue on Saturday, November 9, as the best teams compete for a chance to win a spot at the 2020 Tokyo Olympics.

“We started well, but we became very sluggish which affected our performance. We have to pick it up for the remaining games. We have Zambia tomorrow and we have a couple of injuries. We also have a lot of things that we need to rectify.”

“We were a bit sluggish in the beginning, but we improved and scored some good tries. Our passing was nice and crispy which was very pleasing to watch. We are playing Uganda tomorrow. We are facing stiff opposition.”

“Honestly speaking we played badly today. We need to work harder as a team. Having said that, we are a new team. The team is still getting together. We managed to score tries, but at the same time we gave away soft tries. So, our tackling needs to improve.”

For updates and results:

Download logo
Connor Pritcharo of Zimbabwe challenged by Ladipo Azeez Olaitan of Nigeria during the 2019 Rugby Africa Mens 7s match between Nigeria and Zimbabwe at the Bosman Stadium, Brakpan on the 08 November 2019