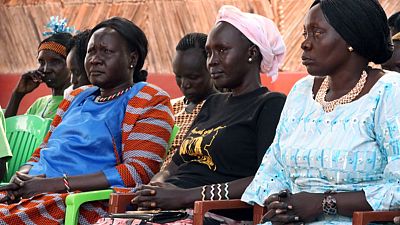 This week, women advocates and local authorities in Western Lakes gathered to celebrate the momentous appointment of Ayor Achol Kuer, the first female in the history of Dinka culture to become a member of the traditional court of the area.

“This is a result of women’s advocacy groups fighting for the 35 percent political representation that has been allotted to them in the revitalized peace agreement,” said Ms. Kuer.

In South Sudan, courts have historically been the domain of men, which has created numerous complex situations when all-male judicial officers have been trying alleged crimes committed against women, like sexual assault and other kinds of gender-based violence.

“From now on, there will be a new dimension at play in the way judgments are made in gender-sensitive cases, and this would never have happened without the appointment of Ms. Kuer,” explained Doris Maholo Saydee, a gender affairs officer serving with the United Nations Mission in South Sudan.

Ms. Kuer was not alone in receiving acclamation during the encounter organized by the peacekeeping mission’s Gender Affairs Unit: Ayen Majok Deng has also been sworn in as the only female minister in the region, leading the ministry of education.

“Since I’m a young woman, my appointment means a lot for the girls of Western Lakes. It will encourage them to go to school and study hard to achieve great things,” said Minister Deng.

In addition to revelling in their newfound victories, the women also used the meeting as an opportunity to exchange ideas on gender-responsive leadership.

“Not having a voice in government has pushed women to unite and brainstorm their own creative resolutions and action points, which they are now able to present directly to their female counterparts in government,” said Ms. Saydee.

Western Lakes women are adamant that their successes thus far mark only the first of many to come.

“We need parity at all levels. One or two cabinet ministers is not enough, gender equality has to be the goal,” the UN gender affairs officer continued.

Getting more women into leadership positions will not come easily, though.

“I will continue fighting hard to see that other women are able to join me in the traditional court as well as other positions of leadership. With that hope, I am not afraid of working in a male dominated atmosphere,” Ms. Kuer said, with Minister Deng adding that increased political representation will not simply by handed to women without them insisting on it to happen.