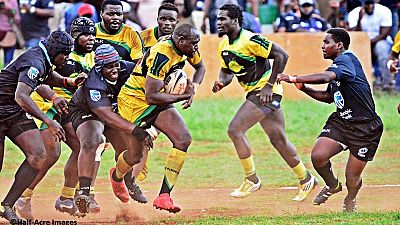 Kabras Sugar stayed top of the Kenya Cup after Saturday’s 43-9 win away at Stanbic Mwamba. The sugarmen are one of five teams that have won their opening two matches but are top of the log due to their massive points difference.

Menegai Cream Homeboyz sit fifth on the log with with two wins from two but were unable to collect a bonus point in the 15-10 win away at Top Fry Nakuru.

Kisumu RFC’s 19-17 win over Nondescript hauled them off the bottom of the pile and they currently occupy seventh position, just a point and a position below sixth placed Mwamba.

Nondies,Top Fry Nakuru, Western Bulls, Blak Blad are all winless after two rounds of action but have each picked up a losing bonus point while Kenya Harlequin are at the basement after failing to collect a losing bonus in their two consecutive losses to date.

The Strathmore Leos have opened up a one point lead atop the second tier KRU Championship after Saturday’s 17-16 match day two win away at Mean Machine. The Leos are also one of four varsity sides occupying the top slots in the division.

With two wins from two games, the Leos have nine points, one clear of University of Eldoret and Masinde Muliro who have eight points after failing to collect bonus points in their two outings to date.

The Catholic Monks sit in fourth position with six points coming off one win and one loss.

Mean Machine are winless after two games and occupy tenth place after collecting losing bonus points in each of their two outings to date. USIU and Egerton Wasps prop the table, each having lost two games while collecting a bonus point apiece.