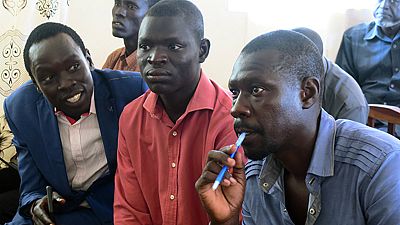 Journalists in Aweil have described their relationship with the government as merely “average”. They did so at a training organized by the United Nations Mission in South Sudan, aimed at discussing how to improve the collaboration between the two sides.

“Sometimes differences [of opinion] appear when a journalist touches a specific interest of a particular government institution,” says Mou Deng Deng, who heads a local community radio station in Aweil East. “This makes [some government] people angry because you have touched a sensitive issue.”

The training conducted by the peacekeeping mission’s Civil Affairs Division was attended by a total of 40 journalists and representatives from the executive, parliamentary and judiciary branches of the government.

“The issue is a big difference between different stakeholders when it comes to the understanding of the ethics and principles of journalists,” believes the Media Advisor for the Center for Human Rights for Lawyers, Poverty Alfred. “Some institutions still have a very limited understanding of the role of reporters.”

The workshop was meant to strengthen the cooperation between the media and the authorities at the national and subnational levels in support of the implementation of the South Sudan peace agreement. For healthy relations to prevail, grasping the vital functions served by journalists is vital.

“We local presenters should benefit from this training,” says journalist Daniel Acich Kuot, who works for a local community radio station. “In our area we have been cooperating with the government. We receive a lot of our information from them, they always call us.”

South Sudan has laws governing the work of the media in the country. These regulations include the Public Broadcasting Cooperation, the Media Law, and the Right to Access to Information bill. Despite this legal framework, journalists are still frequently harassed and abused while performing their duties.

“It is very challenging,” says Oliver Modi, Head of the Union of Journalists in South Sudan. “Recently reporters were harassed at the South Sudan People’s Defense Forces office in Juba. That is unacceptable,” he added, referring to two female journalists who were recently hit by a camera tripod wielded by a high-ranking military officer while they were covering an event at the military headquarters.

While acknowledging that a healthy society needs independent media outlets to develop in a positive way, Mr. Modi did also urge journalists to stay ethical, truthful and impartial at all times, thus avoiding the risk of inciting anyone.

That, however, is not always the case, at least not according to Joseph Lual Dengdit, former minister of information in Aweil.

“Media outlets have their own interests that they want to promote. Conflicts arise when reporters exaggerate,” says Mr. Dengdit.

Deng Ayoum Ayoum, Minister of Local Government and Law Enforcement Agencies in Aweil, cited a lack of knowledge of the regulations guiding the work of media outlets as a source of conflict. To counteract this deficiency, he recommended relevant laws to be widely distributed to those concerned.

The Deputy Governor in Aweil, George Award, believes that the workshop discussions will prove beneficial to everyone involved.

“After this workshop we should be able to know how we can work better together in our different capacities.”