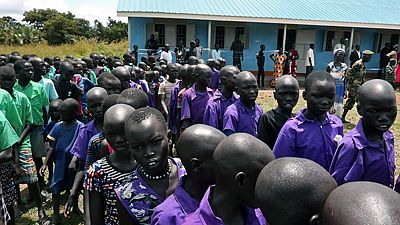 Asked if she wants to be the president of South Sudan when she grows up, 12-year-old Rebecca Aman Chan, a student at the Asementi Primary School gazes into the mid-distance, pondering this exciting thought experiment.

“Yes, I can be the president,” she beams, and rightfully so.

In its quest to propel the somewhat prompted dreams of Rebecca and her peers, the United Nations Mission in South Sudan has been at it again, constructing and delivering three new classrooms to the Asementi Primary School in Gok in the Greater Lakes region.

The educational structure is one of the peacekeeping mission’s Quick Impact Projects: low-cost interventions expected to make a substantial contribution to the welfare of local communities.

“When we first came here, we found older girls teaching the younger ones. Parents would tell us that when a girl child is kept in school, the frightening prospect of her being prematurely married off becomes less likely. With a proper school nearby, parents said they would send more girls to classes, because they fear sending the girls far off from home,” explained Caroline Opok, the team leader of Relief, Reintegration and Protection Unit, Rumbek Field Office.

“I want to always stand before a big congregation and teach people about the word of God. That’s why, Christian Religious Education is my favourite subject,” the potentially future messenger of divine wisdom explains.

The pupils initially studied in the shade of benevolent trees, some of which with soothingly pendulous mangoes for all to see and yearn for. Meanwhile, a few students were taking some of their classes in a building in a precarious and dangerous state of disrepair. This worried many of the community members.

“When the rains would come, the children had to run away from the tree to the old classroom. Because part of it was already at the brink of collapse, we worried that the roof could crush some of these keen learners. So, we always asked ourselves whether to leave the children drenched in the rain or tell them to seek shelter in the makeshift classroom,” said Achoth Maker, an elder and town court president, remembering the tough decisions that had to be made.

Now, however, that is a conundrum firmly tossed in the ever-swelling bin of history. Not only do the new classrooms sport walls and sturdy-looking roofs, but they also come equipped with blackboards and inviting benches.

From here on, it’s onwards and upwards, according to headmaster Simon Majak Marial, who has already set his sight on additional educational and security features.

“With the classrooms done, we will now strive to get books, pens and pencils for the pupils, a staffroom, and fencing of the compound so that wayward cattle and goats do not disrupt essential learning opportunities”.