835 000 people to receive second dose of the cholera vaccine in North Kivu, Democratic Republic of the Congo 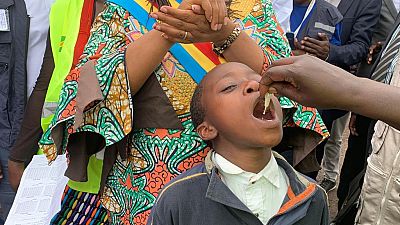 The second phase of an oral vaccination campaign to protect more than 835 000 people from cholera in the North Kivu Province of the Democratic Republic of Congo (DRC) begins today. While North Kivu has been struggling with an outbreak of Ebola virus disease for more than a year, this north-eastern province is also endemic for cholera.

The Ministry of Health is launching this major campaign, which is fully funded, including operational costs, by Gavi, the Vaccine Alliance and is being implemented with the support of the World Health Organization (WHO) and other partners in the Global Task Force on Cholera.

The campaign aims to reduce the still-high risk and persistence of the cholera outbreak in seven North Kivu health zones (Binza, Goma, Karisimbi, Kayna, Kibirizi, Kirotshe and Rutshuru) by targeting everyone older than 12 months with the oral vaccine.

This five-day campaign (from 30 October to 3 November) follows the first-dose distribution of the cholera vaccine in June 2019, which was also fully funded by Gavi, the Vaccine Alliance, with the extensive technical and logistical support of WHO and partners. The previous effort reached at-risk populations in the same seven health zones targeted in this second campaign.

“The second dose of the vaccine provides long-term immunity against cholera and is a key tool in contributing to the control of the cholera epidemic,” said WHO Regional Director for Africa Dr Matshidiso Moeti. “While ending the Ebola epidemic in North Kivu is a priority, WHO is working with the Ministry of Health to strengthen the fight against all epidemics and health emergencies in the country.”

North Kivu is just one of 21 provinces fighting cholera. Since the beginning of 2019 (from week 1 to week 40), data provided by the national surveillance system indicates a total of 22 314 suspected cholera cases, with 390 deaths (a 1.7% case fatality rate) recorded in 159 health zones across the country. During week 40 (30 September to 6 October), 714 cases and 5 deaths (0.7% case fatality rate) were reported.

North Kivu, South Kivu, Tanganyika and Haut-Lomami provinces reported 92% of the suspected cases during week 40. As a cholera-endemic province bordered by Lake Kivu, North Kivu and the seven targeted health zones experience frequent shortages of safe drinking water and the risk of cholera during the rainy season, which is currently the case.

“It is more necessary than ever to recall the importance of investing in sanitation in our local infrastructure, including gutter and sewer cleaning in our cities, in addition to increasing the coverage of drinking water to reduce any risk of people consuming contaminated lake water that exposes them to cholera,” said Dr Deo Nshimirimana, Interim WHO Representative in the DRC.

During this second-dose campaign, more than 1170 vaccinators (585 teams) working with 124 community mobilizers and 233 community supervisors will use a door-to-door strategy to provide the oral immunization.

Cholera is a highly contagious disease transmitted through contaminated water or food. It causes severe diarrhoea and dehydration that must be treated immediately to prevent death, which can occur in just a few hours, and to prevent the disease from spreading on a large scale in a high-risk environment.

During 2019, more than two million people in North Kivu Province and in Kasai Province in the central region received two doses of the oral cholera vaccine in campaigns also supported by WHO; Gavi, the Vaccine Alliance; and other partners in the Global Task Force on Cholera.

Download logo
835 000 people to receive second dose of the cholera vaccine in North Kivu, Democratic Republic of the Congo (1)