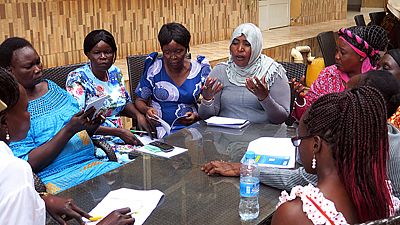 South Sudanese women are calling for political leaders to meet their commitment to ensuring 35 percent representation in the new transitional government and are urging each other to actively participate in the peace process to protect their collective interests.

That call came during a ‘women to women’ dialogue forum hosted by the United Nations Mission in South Sudan and the Gender, Child and Social Welfare Ministry in the capital Juba. About 60 participants, including local authorities, faith-based groups, civil society and political parties took part.

The group discussed the development of a road map for ensuring that the provision for 35 percent representation of women in the unified transitional government, due to formed on November 12, becomes a reality.

A prominent political leader and South Sudanese representative to the East African Parliament, Dr. Ann Itto, told the group that strong action needed to be taken by women themselves if they wanted the 35 percent target to be realized.

She encouraged women to join political parties and pressure groups as well as the security sector to challenge the patriarchal society that dominates South Sudan. Dr. Itto also reminded the group of their power and influence, particularly during elections and referendums, given women make up the majority of the population.

“A party is where they cook the soup and it is served to the people. They can fight for your rights, and there are many things that you can achieve through being in the party,” she said. “You need to fight for the policies including electoral laws, that protect the interest of women when you become part of these organizations.”

Dr. Itto said it was vital that women took a unified approach to the peace process, including issues such as securing accountability for crimes committed during conflict.

“You must walk back to the women at grassroots level and move forward with them to translate the 35 percent into reality,” she said. “Also, for us to bring peace to ourselves, we need to respect the transitional justice process so we can tackle ruining cases like rape.”

A participant representing women with disabilities called for specific reference to the most vulnerable in the peace agreement.

“As we hear from the media that challenges facing the formation of a unity government will be fixed after it’s formed, and all will be well, there is need for us people with disability to work together with others and be represented as women of South Sudan,” said Zekia Reida who has a visual impairment. “Although the peace agreement never talked specifically about us, we are South Sudanese.”

Minister of Gender, Child and Social Welfare, Rose Paulino Lisok, told the participants they should submit recommendations from the forum to the Government so that an action plan could be development and implemented, including translating the agreement into various languages and brail.

UNMISS Gender Affairs Unit representative, Gladys Jambi, said the Mission was working with authorities to promote gender provisions within the revitalized peace agreement and to identify any gaps that may hinder women’s full participation in governance.

“UNMISS will continue to lead peacebuilding engagement across the country, including promoting gender inclusivity, with the support of civil society organizations, faith-based groups and government officials,” she said.