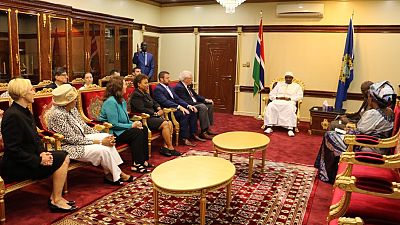 The delegation met with His Excellency President Adama Barrow on Monday, before participating in a session with the Speaker of the Parliament and numerous parliamentarians in an open discussion to share best practices and discuss capacity building mechanisms and budgeting.  The mission of the U.S. House Democracy Partnership is to promote responsive, effective government and to strengthen democratic institutions by assisting legislatures in emerging democracies.  Central to their work is peer-to-peer cooperation to build technical expertise in partner legislatures and enhance accountability, transparency, legislative independence, access to information, and government oversight.

Distributed by APO Group on behalf of U.S. Embassy in The Gambia.
Media files