Cyclone Kenneth made landfall in northern Mozambique on 25 April with winds over 200km/hour and caused extensive damage in Cabo Delgado and Nampula Provinces to homes, infrastructure and agricultural land.

Cyclone Kenneth arrived just six weeks after Cyclone Idai had made landfall in central Mozambique in March; according to the Government of Mozambique’s Disaster Management Institute (INGC) Cyclone Kenneth affected over 280,000 people.

Since Cyclone Kenneth made landfall, IOM and its partners have assisted over 200,000 affected individuals (more than 40,000 households) with various shelter and non-food items. IOM was present, providing support in the immediate days following Cyclone Kenneth’s landfall, and by rapidly scaling up operations continues to respond to urgent humanitarian assistance and recovery needs.

As of mid-May IOM, had delivered over 7,000 plastic sheets to partners for distribution in Cabo Delgado and Nampula in responding to urgent shelter needs.

In close coordination with the INGC and local actors, IOM provided assistance on Matemo Island, where few buildings were left standing. There, shelter kits were critically needed to assist affected families, over 600 kits were provided in the 2 weeks following the cyclone.

Now six months after this natural disaster, affected communities in northern Mozambique are working towards recovery, and families are attempting to quickly finish rebuilding damaged homes before the pending rainy season arrives, while thousands of families remain in need of humanitarian assistance to support recovery.

“The area was devastated by Cyclone Kenneth. It rained heavily, and people’s belongings were washed away. Three people drowned near the river. Some schools and classrooms fell. The homes which are made of natural materials – mud and branches – began to fall; over 750 homes were damaged or destroyed. People were without food; it was a very difficult time,” said Josefina Ambassi, Chief of Chipene Village, in Memba District, Nampula Province.

“The community is almost healthy again, but there are more than 400 families who are still working on rebuilding or repairing their homes. They are worried about finishing the construction in time before rainy season and building stronger houses that will not fall. They will use the tarpaulins we received to cover their homes – instead of a wet place they will have a safe shelter to protect their children,” Ambassi added.

Yesterday (24/10) IOM provided over 400 households in Chipene Village with relief kits, including a tarp, rope, bucket, water container and kitchen set. In the upcoming week over 3,600 families in Memba District will receive relief kits, funded by the Office of US Foreign Disaster Assistance (OFDA) and by the United Nations Central Emergency Response Fund (CERF).

IOM is also providing affected populations with support for Health, Mental Health and Psychosocial Support (MHPSS), Protection, and Camp Coordination and Camp Management (CCCM). IOM efforts toward recovery in Cabo Delgado Province include shelter support for 3,000 families to rebuild more durable homes; and rehabilitation of primary schools and a health clinic in heavily affected Mucojo coastal area, projects taking place in collaboration with local partners. These efforts are in collaboration with the Government of Mozambique’s INGC, local authorities and humanitarian partners.

“The effects of Cyclone Kenneth continue to be felt in Northern Mozambique. Though six months have passed, and flood waters have receded, assistance is still needed to facilitate repair of infrastructure, including community spaces,” said IOM Mozambique Chief of Mission Katharina Schnoering. “There is real urgency for families to rebuild their homes, as the rainy season is imminent, and further humanitarian assistance is required to facilitate recovery.”

Through the Displacement Tracking Matrix (DTM), IOM conducts regular assessments in displacement sites, collecting information to share with the government and humanitarian partners to inform the response.

According to the most recent IOM DTM report on displacement following Cyclone Kenneth, 24,036 displaced people are currently tracked (across five accommodation centres, one transitional centre, and with host communities) to assess needs and gaps, in support of the humanitarian community and in close coordination with the Government of Mozambique. 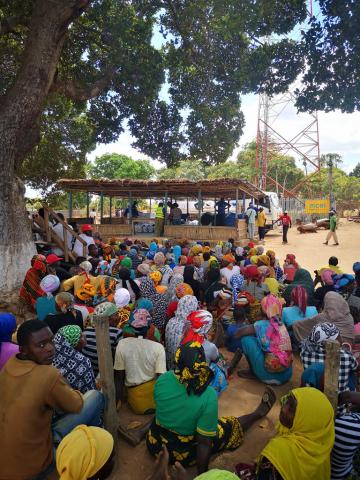