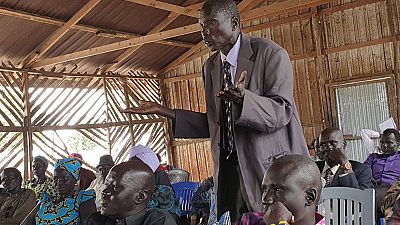 Temporary schools are being set up and land will be allocated to displaced families returning to the Southern Liech region of South Sudan to help them settle in and rebuild their lives.

That commitment was made by local authorities, community leaders, representatives of the Sudan People’s Liberation Movement In-Opposition, women and youth groups who gathered in Leer at a workshop hosted by the United Nations Mission in South Sudan to discuss their role in supporting those returning to the area.

Thousands of families across the region fled their homes during the five-year conflict that erupted in 2013. In the wake of a new peace deal and reduced political violence across the country, many have decided it is safe enough to return to their homes.

However, in many areas, there is still a lack of basic services and support, including access to food, clean drinking water, education and medical facilities. Many homes were also destroyed during the conflict or have been illegally occupied by others.

About 50 participants at the workshop pledged their support to those returning and spent two days exploring ways they can provide practical assistance.

SPLM-IO representative, James Yoach Bading, said a temporary school had been set up for returning children to help them reintegrate into the education system.

“We have plan and strategies that we put in place already for returning communities. We have built a temporary learning space for returning children and host community children,” he said.

“The security for returning population will be granted by both the government and SPLM-IO as we are committed to provide protection to our people.”

He further committed to the provision of land to new arrivals so they can start rebuilding their lives.

“We will work hard to promote peace and reconciliation between the returnees and host community,” he said.

“We were only separated by the conflict. They are our sisters and brothers. we will share the little food we have and will share our water with them,” she said.

Thonyor Commissioner Yien Padiet Tut pledged to work in partnership with humanitarian agencies to provide assistance to the needy.

“The state government is committed to facilitating the return of the displaced population to their areas.,” he said. “Peace and reconciliation among our community is priority number one. We will make sure that returnees and host community live in peace and harmony”.

In March this year, UNMISS transported more than 40 displaced people from the UN protection site in Wau to Leer and many others are continuing to return to the area spontaneously.